The new render shows an edge-to-edge display and a dual camera setup similar to Nokia 8 on the rear. The display comes with curved edges. 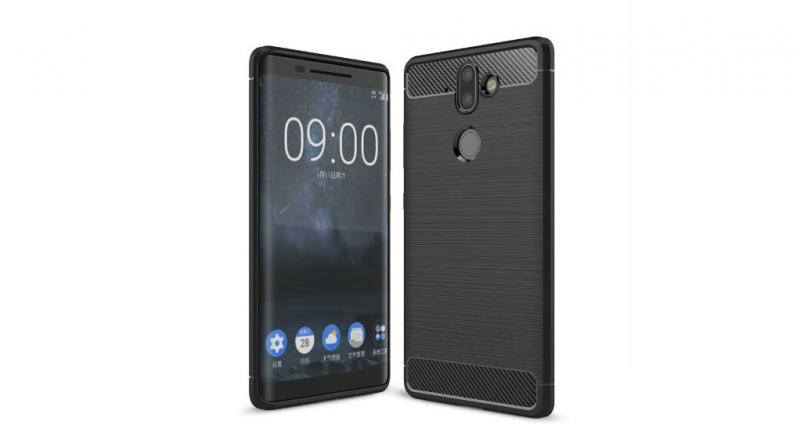 Mobile fans all over the world witnessed the re-birth of Nokia last February; When HMD Global brought back the iconic brand back in smartphone space. The company focused their efforts on making Android-powered devices with near stock experience. The first release of the new venture was mid-range Nokia 6, which was initially a China exclusive.

HMD later released 5 devices for the Indian market including the aforesaid Nokia 6. The last of those came in form of entry-level Nokia 2 which was launched in October.

There were rumors of Nokia launching a flagship high-end device dubbed as ‘Nokia 9’ in recent months but there has been no word as far as actual availability is concerned.

However, it looks like the launch is imminent now as Amazon UK has listed protective cases for alleged Nokia 9 on sale. These cases have been manufactured by the by the case-maker HualuBro and are listed by multiple sellers. The listing also shows alleged Nokia 9 render in 3D which gives away the design of the phone to a great extent.

It is to be noted that many device manufacturers supply the prototype phones with measurements to the case makers before the unveiling, in order to allow the case makers to design the cases in time with the launch.

The new render shows an edge-to-edge display and a dual camera setup similar to Nokia 8 on the rear. The display comes with curved edges, similar to the one seen on Galaxy S8 and LG V20. The dual camera setup has been placed in the top center aligned vertically. The LED flash is seen situated to the right of the camera. The image also represents rear-mounted fingerprint sensor.

HMD Global has been very ambitious with Nokia’s comeback as the company has already announced two years OS support for all its devices including the next Android update i.e Android P. With the new flagship smartphone, Nokia will  have a g fight in its hand against the bezel-less smartphones like the Samsung Galaxy S8, Galaxy Note 8, Mi Mix 2, LG G6, OnePlus 5T and even the  iPhone X.

The smartphone is widely expected to launch at MWC 2018. There being no confirmation from the company, we suggest you take this piece of information with a pinch of salt.