The top three winners received prizes worth Rs 3.5 lakhs, while the other three finalists received awards of merit from Samsung. 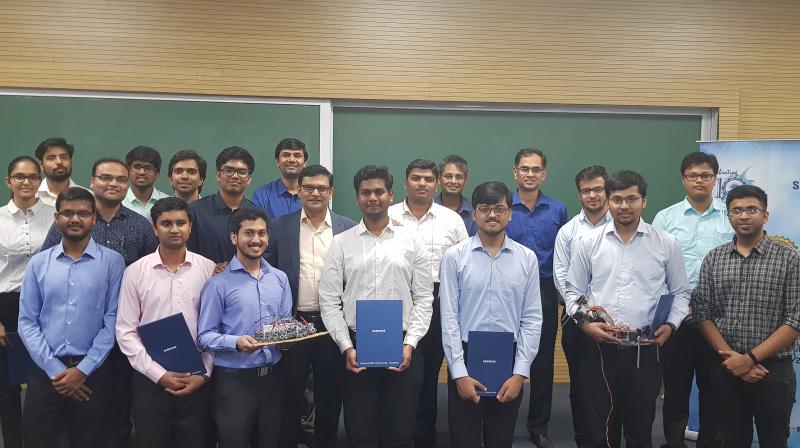 Samsung India conducted the 9th edition of the Samsung Innovation Award at the Indian Institute of Technology (IIT), Indore. The aim was to recognize and reward innovations that have the potential to revolutionize everyday living.

This year, the theme was ‘Systems that learn’ and students were encouraged to think creatively and propose practical ideas around multi-modal sensing, applications of learning systems, VR, XR, 3D imaging, distributed AI and more.

The top three winners received prizes worth Rs 3.5 lakhs, while the other three finalists received awards of merit from Samsung.

The First prize went to Ram S. Mohril for the project “AR/VR Enhanced Textbook reading and learning experience”. The project aims to transform the technical writing and learning field by developing a book for higher education students through augmented and virtual reality technologies.

The Second Prize was grabbed by Chaitanya Mehta for a ‘Tree Climbing Quadraped Robot’ and finally, the third prize was awarded to a team of three- Nemath Ahmed, Suraj Polamaina and Shavez Malick for a project called ‘Immersive Acoustic Spatial Awareness for Visually Impaired’.

The Merit awards were given to the projects “Fingerprint Spoof buster”, “AI based Contactless Biometric system” and “Leukemia Classification from Microscopic Images using Deep learning techniques”.

The six-finalist teams had the opportunity to present their ideas to the jury consisting of senior researchers and scientists from Samsung and IIT-Indore.

The winning projects were then selected on the basis of originality of the product and solution, feasibility of implementation, completeness, relevance in the market and presentation to the jury members at IIT-Indore.