The programme is now in its second edition and is titled Khula Asmaan and has nine mentors and 150 young girls training under them. 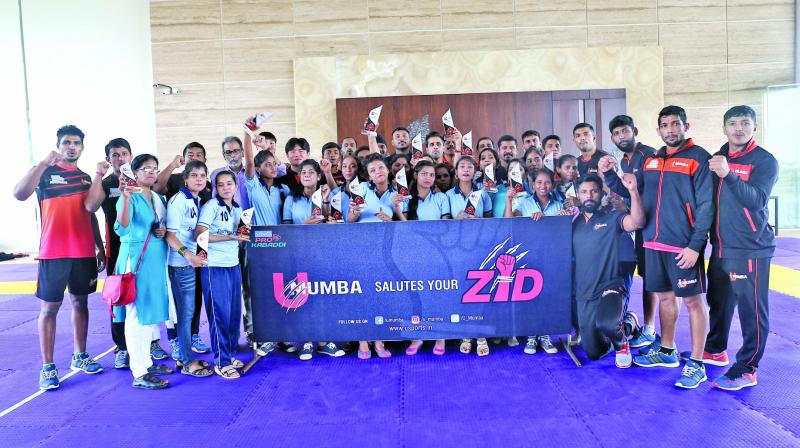 The U Mumba team with Apnalaya’s kabaddi mentor girls.

Amidst squeals of delight and laughter in meeting with their kabaddi heroes, 18 young women from NGO Apnalaya’s programmes Parivartan and Khula Asmaan, received the U Mumba - ZID Award. The ZID award, presented for the first time, awards and honours the efforts of community change-makers in using sport as a tool for the empowerment for women living in economically challenging situations.

The 19 young awardees were recognised for over two years of persistence and commitment as mentors to girls in Shivaji Nagar and for using the sport of kabaddi to empower them as well as equipping them with the skill of the sport to ensure that these young girls gain confidence and aren’t intimidated by their surroundings. The awarded mentors have also through the years, convinced parents to encourage their children to embrace the sport.

The awardees are part of the NGO Apnalaya’s sports-based programmes Parivartan and Khula Asmaan that focus on using sport, specifically kabaddi, to instill confidence in the young girls and address violence against women. In addition to training sessions, the programme includes sessions to bring attention to topics ranging from life skills and health to gender and violence.

The programme is now in its second edition and is titled Khula Asmaan and has nine mentors and 150 young girls training under them.

Commenting on the award, Supratik Sen, CEO, U Mumba, said, “We believe sport can trigger social change and have a positive impact on society. But being a change-maker isn’t an easy task and the path consists of multiple obstacles. The few, who are successful in bringing about a positive change display a ‘Zid’ to achieve their goal of transformation. ‘Zid’ is a necessary ingredient, a value, to change minds and effect actions and we at U Mumba are humbled by the zest of these young women and believe that they are the best recipients of this honour”.

Coach Bhaskaran added to Supratik’s thoughts, saying, “We are glad these young girls have used kabaddi to enable their societies. Through the years, these communities have grown credit to the skills that the sport provides them with. We’re also keen to help them in their training and oversee their development in the sport.”