Never too old for football

James P.H. is one of the oldest members of Ambalavayal Football Club. 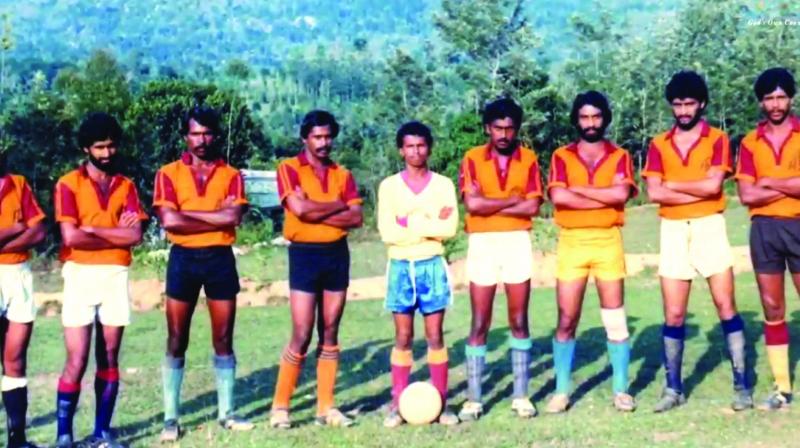 An old picture of the Ambalavayal F.C. team

About 5.30 in the evening on the half-burnt grass ground at Ambalavayal High School, a group of old men are seen walking as part of their daily routine exercises with the hope of burning some calories. On the other side of the ground, a sixty-year-old man is playing football with all his gear on. He was not burning calories but playing seriously like he has been doing it for almost 40 years. This is James P.H., the centre back of Ambalavayal F.C. (AFC), one of the oldest and most famous sevens clubs from the state.

Here in Ambalavayal, almost 5,000 kilometres away from Russia, where the FIFA World Cup is going on, James is mourning his favourite team Brazil’s quarter-final exit, watching the game in front of his television, walking down memory lane of James as a football fanatic and as a formidable defender of AFC. “It was in 1981 that I joined Ambalavayal FC, the same year of its inception, three years after 1978 WC.” It was the time when Kerala football was nourished with talents and a lion’s share was from Malabar. “One of the biggest reasons for a ‘talent outbreak’ was these local sevens football clubs and tournaments. But many kept on playing in the local tournaments without going to the next level,” says James.

The team has had some outstanding seasons from 1982 to early 1990s. Along with James, OV Varghese (goalkeeper), Joshi (wingback), Sajeer Ali ( forward), Raghu (forward), Geethesh Babu (goalkeeper), Jayadevan, Kuttan (forward), Aali (wingback) and Devasia, took AFC forward and was one of the fiercest teams during the late 80s.

After the team retired from football, they had to look at other professions for a living. There are businessmen, tailors and shop owners among them and they play very rarely now. But to everyone’s amusement, James still manages to find the time to play football after his work. “I am a lorry driver and carry loads from crushers in Ambalavayal.  Seeing my passion for the game, they allow me to go early so that I can join the kids and youngsters to play football. I keep my jersey, boots and chin pad inside the lorry so that I can directly go to the ground from work. People used to ask me how am I able to play still at this age. For me this is not a hobby or recreation, this is life. This is just like any other daily need for me. I cannot imagine myself without football.”

James’ friend and the team’s former goalkeeper Baburaj says they really struggled during their playing days. “It was not easy like today. But we were nothing short of a bunch of spirited young lads dreaming big. I cannot see any amusement in James’ case, he is as enthusiastic now as a young player who is in his 20s. His secret to that stamina is the result of the love towards the game.”According to friends, James was the first to arrive for the training and last to leave.

James, the father of two boys, says he wants his sons to follow his path. It just does not help them grow physically, football is a great sport to grow mentally too. “Not just football but all sports, but football makes you more social. I used to tell them to go and play when they were back from school. Youngsters these days tend to develop a nature that disrespects elders, using drugs and falling in badlands. So I found that for my children, the best way to keep them engaged was by offering my football to them. So they won’t go anywhere that is harmful to them,” he says.

As Croatia and France get ready for the final on Sunday, James, a hardcore Seleção fan, says Croatia has the edge to clinch the World Cup. “My team Brazil are already out but I wanted them to win the cup to revive themselves up from last time’s 7-1 mauling at the hands of Germany. But hard luck for Neymar and boys…”

Ambalavayal FC under Ambalavayal Sports Club has nourished and made the small town proud across Malabar. It is hard to write the team’s history without mentioning the likes of James, Baburaj and others of that generation. Now the team has undergone so much change and is filled with a mix of local and foreign players, mainly from Africa. But still, James keeps in touch with the team and shares his thoughts with them.

When asked, James says he cannot imagine himself not playing football. “I am not thinking about it. Football is in my blood and I don’t want to stop,” he says. For his family and friends, they can easily imagine football without James, but they are not ready to imagine James without a football.