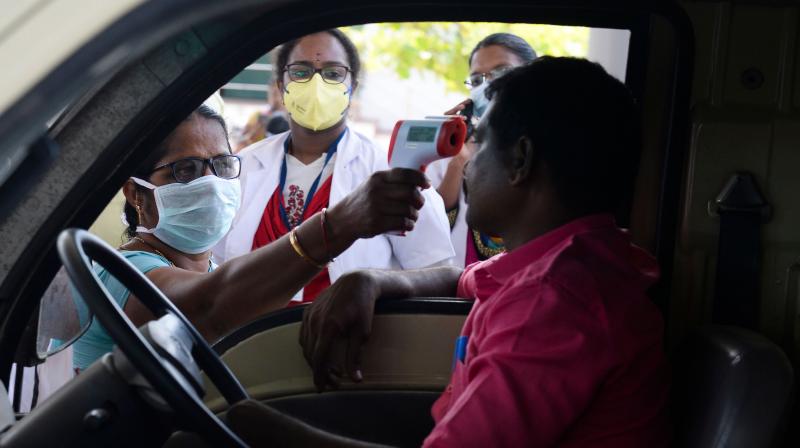 Health officials screen a driver for coronavirus symptoms on the Tamil Nadu-Andhra Pradesh on March 24, 2020. (AFP)

Krishnagiri, Tamil Nadu: Some 200 villagers made a bonfire of their new clothes after receiving news that the man who sold them has been put in precautionary quarantine for coronavirus infection.

This bizarre incident happened Friday night at Omethepalli village, along the Chennai-Bengaluru national highway in Shoolagiri taluk of Krishnagiri district in Tamil Nadu.

According to a local person, R. Manujnatha, the villagers had purchased new clothes for Ugadi (the Telugu new year’s day) from a textile merchant from Shoolagiri. When they came to know of the merchant being quarantined, they dumped the clothes in the street and set them on fire.

“People did not sleep all night. Some cried in fear that they will be infected by the coronavirus,” said Manjunatha.

The merchant had returned from Malaysia on March 11, and as per the preventive protocol being followed, he and his family have been advised home quarantine although none of them has any sign of illness.

Health authorities pasted a sticker on the family’s house warning people to avoid direct contact with them. The story circulated on What'sApp groups and triggered panic in Omthepalli vilage.

Krishnagiri district collector S Prabhakar said admin officials visited the village and explained to the villagers why the textile merchant was put in isolation. “We told the villagers not to panic and not to believe fake information sent on social media groups,” he said.

No coronapositive case has been detected in Krishnagiri district. However, 900 people, including 621 foreign returnees and 279 people who are visiting from other states, are being kept in home quarantine.

Kerala to decide on complete lockdown on Monday