The link between NPR & NRC is obvious

Not only is the link between the NPR and the NRC very obvious, but the BJP-led government’s ideological commitment to it is also unwavering. 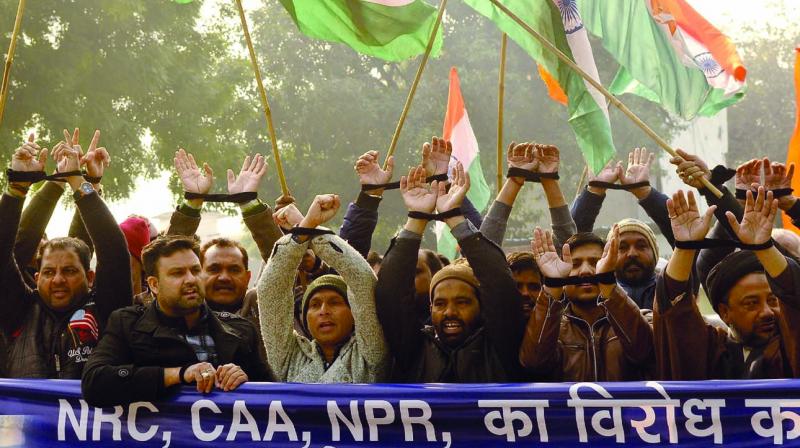 The NPR is a register of the usual residents of the country that ostensibly facilitates targeted policy interventions and reduces leakages in the welfare system.

A population Census is the process of collecting, compiling, analysing and disseminating demographic, social, cultural and economic data relating to all persons in the country, at regular intervals. The earliest known census was conducted in Babylon some 5,800 years ago, and later censuses were conducted in the Mauryan Empire as was described in Chanakya’s Arthashastra (circa 350-283 BC) which required inventorying of the population as a measure of state policy and for taxation. In the modern era, seven censuses were conducted in the pre-independence period in India starting 1872 and seven have been conducted in the post-independence period starting 1951.

India thus has a long history of evidence-based policymaking through Census data. Never has there been any controversy over the collection of Census data. This is because people trusted the government’s intentions to put the data to constructive use. But the 2021 Census will be conducted along with the National Population Register (NPR). The NPR is a register of the usual residents of the country that ostensibly facilitates targeted policy interventions and reduces leakages in the welfare system. But the NPR is being linked to the BJP’s longstanding commitment to a nationwide National Register of Citizens (NRC), which involves a scrutiny of people’s claim to Indian citizenship. This has the citizenry up in arms due to legitimate concerns that this data will be used to divide people further based on their faith and will disadvantage certain minority groups. It can be compared to the ignominious demonetisation saga that turned people into hoboes for their own hard-earned life’s savings.

The resulting spontaneous protests shook the government to the extent that senior ministers clarified (misleadingly) that the government has not discussed the modalities of an NRC. But the government allocated funds for the Census and the NPR, whilst claiming there is no link between the NPR and the NRC. However, several sources point towards not only the BJP’s commitment to the NRC, but also to a direct link between the NPR and the NRC. These sources include home ministry notifications, press releases, speeches made by the home minister and the minister of state for home affairs, written replies to questions in the Parliament, the party manifesto and speeches made at election rallies.

The NDA government in December 2003 had notified the Citizenship (Registration of Citizens and Issue of National Identity Cards) Rules, 2003 which explained the rules for the NPR and its link to the NRC. The notification stated:
“3.(4) The Central government may… decide a date by which the Population Register shall be prepared by collecting information relating to all persons who are usually residing within the jurisdiction of local registrar.
3.(5) The Local Register of Indian citizens shall contain details of persons after due verification made from the Population Register.
4.(3) For the purposes of preparation and inclusion in the Local Register of Indian Citizens, the particulars collected of every family and individual in the Population Register shall be verified and scrutinised by the local registrar…
4.(4) During the verification process, particulars of such individuals, whose citizenship is doubtful, shall be entered by the local registrar with appropriate remark in the Population Register for further enquiry…”

The Atal Behari Vajpayee-led NDA government did not get re-elected to oversee the NPR and while the UPA did conduct the NPR, it did not scrutinise citizenship details. The Narendra Modi-led NDA government then updated the Population Register in 2015 and linked it with Aadhaar biometrics for about 40 per cent of the population. The government now intends to complete the process for the remainder of the population. Some will wonder why then is there a hue and cry, if exactly the same data has been collected before and the entire exercise carried out by different governments? This is because this government intends to conduct the exercise with a mala fide intention. This innocuous exercise to collect population data has been tweaked by the current government so as to provide a base for the NRC and to execute its majoritarian agenda. This round of the NPR requires respondents to furnish data on 21 criteria as against 15 criteria in the last NPR. And for the first time, respondents are to declare “date and place of birth of both parents”. This information assumes significance because of the Citizenship (Amendment) Act that stipulates that for people born after 1987, at least one parent must be a citizen.

Other than changes to the NPR questionnaire, press releases by the home ministry along with answers by the then junior home minister in 2014 make it unambiguously clear that the NPR and the NRC are linked. A PIB press release by the home ministry on the November 26, 2014 states: “…The NPR is the first step towards creation of National Register of Indian Citizens by verifying the citizenship status of every usual resident.” Further, the junior home minister, while replying to a question in the Lok Sabha, stated: “…Government has decided to create National Register of Indian Citizens (NRIC) by verifying citizenship status of all persons in the NPR and issue National Identity Cards to all the citizens of India.” Even the then home minister had stated inside the Rajya Sabha in 2014 that “both the National Registration Authority and the UIDAI were summoned and told that with mutual coordination they have to ascertain the population of the country, and how many among those are actually the citizens of India. This enumeration exercise will then lead to an NPR through which we will be able to ensure who is a citizen of this country and who is not”.

Not only is the link between the NPR and the NRC very obvious, but the BJP-led government’s ideological commitment to it is also unwavering. In 2003, the home minister, who had first notified the policy, had in the context of the NRC told states, “immediate steps to identify irregular Bangladeshis, locate them and throw them out”. The BJP manifesto for the 2019 general election too spelled out the government’s intention to “implement the NRC in a phased manner in other parts of the country”. The current home minister’s fondness for the NRC exercise needs no introduction.

After making their intention to implement the NRC and the link between the NPR and the NRC being so unambiguously clear, any attempt now to deny it, or to de-link the two is clearly an attempt to hoodwink the public. The NRC process is not designed to make India stronger but accentuate through mala fide means the otherness of the other.