The people of India got even with Indira in 1977’s post-Emergency general election, handing her party a humiliating defeat. 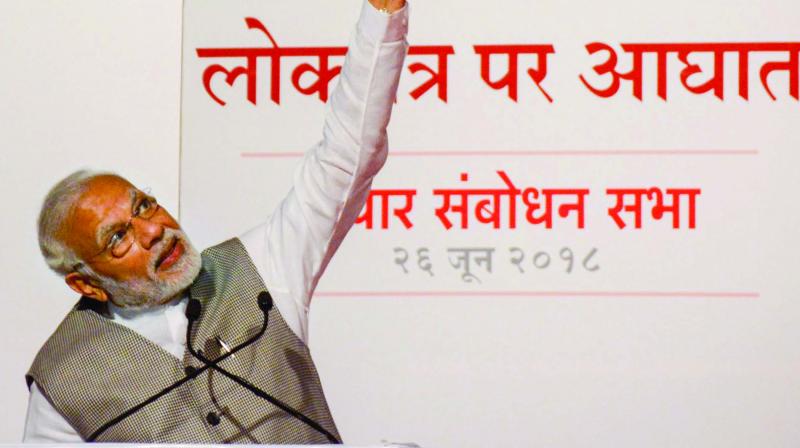 The declaration of a state of emergency in the country, which lasted 21 months from the midnight of June 25, 1975, marked a retreat of the Indian State from a liberal democratic order envisaged in our Constitution, but its cynical recall on its 43rd anniversary by Prime Minister Narendra Modi seems self-serving. It possibly even hints at a sense of anxiety on the BJP’s part as the country’s politicians prepare for the next parliamentary elections.

The Emergency was an inglorious period under the stewardship of Prime Minister Indira Gandhi, who was lionised by poorer sections of Indians and, after the successful 1971 Bangladesh war victory, had been hailed as “Durga” by then BJP leader Atal Behari Vajpayee. Fundamental rights and civil liberties stood suspended.

The people of India got even with Indira in 1977’s post-Emergency general election, handing her party a humiliating defeat. Her opponents were raised to office in a triumphant atmosphere. But such was the misrule by the Janata Party that its government soon fell and Mrs Gandhi was handsomely brought back as PM in 1980.

In the election that followed Indira Gandhi’s brutal assassination in 1984, the BJP got a mere two seats in the Lok Sabha. This should have been a lesson to the RSS not to overdo its championing of the anti-Emergency movement.

During the prime ministership of Atal Behari Vajpayee, the first BJP leader to reach the highest executive office, the RSS-BJP didn’t bother recalling the Emergency to belittle the Congress. The PM well understood the temper of the people. The present PM, Narendra Modi, doesn’t appear so gifted. Anti-Emergency fulminations — over four decades after the event — have been the hallmark of his term, and in his last year in office, these have reached a kind of crescendo, with cries of “fascism” to describe Mrs Gandhi’s Emergency rule. People are apt to smell a rat since Adolf Hitler, with whom more enthusiastic RSS elements compared Indira, did not call elections. Indira revoked the Emergency of her own accord and ordered fresh polls, enabling her opponents to assume power.

As for comparisons with “fascism”, a wide segment of political and scholarly opinion has alluded to “We, or Our Nationhood Defined”, the so-called “bible” of RSS thought — penned by M.S. Golwalkar, a former RSS chief, to this day referred to as “pujya guruji”, or revered teacher, by the faithful. The RSS ideologue and leader endorsed Hitler’s campaign targeting Jews to “keep up the purity of race and culture”. The Nazi butchery, Golwalkar thought, was “a good lesson for us in Hindusthan to learn and profit by”.

Does the Narendra Modi government recall the Emergency because it has failed to live up to its own promises? The question hangs in the air. As for the Emergency itself, remember that then RSS chief Balasaheb Deoras had endorsed Indira’s 20-point programme in order to get out of jail.