Dalit uprising, a wake-up call for all

The Bhim Army is not preaching an armed uprising and is perfectly within the law. 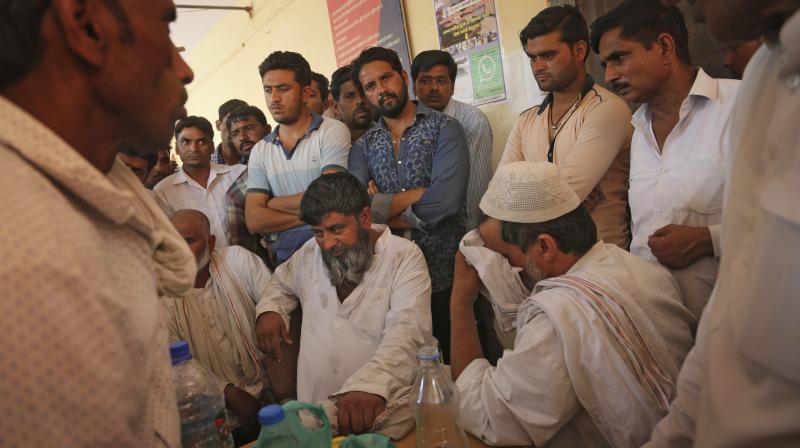 Friends and family members of Shakil (38), a man killed by a gang on the Yamuna Expressway early on Thursday night, gather at the local police station in Jewar, near Greater Noida. (Photo: AP)

Recent developments in Uttar Pradesh are disturbing. Routine law and order crimes have intensified. The state authorities under the Yogi Adityanath dispensation appear helpless, in part because social schisms are being sought to be exploited by the dominant sections of the community, and this is giving rise to an unprecedented dalit backlash.

While the recent ambushing of a car on the Greater Noida-Bulandshahr stretch by criminals, and the murder of a passenger along with the criminal sexual assaults on his women relatives, brought back horror memories of a similar incident when Akhilesh Yadav was chief minister. It is evident that the demon of attacks and atrocities on dalits is showing up during the tenure of his saffron-clad successor even as the present CM goes about fine-tuning the so-called anti-Romeo squads.

Regressive politics has brought out organised anger among the former “untouchable” communities in the state as communal and casteist instincts are coalescing to gain socio-political ascendance in Yogi raj.

In response to the torching of dalit huts in western UP’s Saharanpur by dominant sections of an upper caste group who were out to celebrate Rana Pratap, a regional Rajput warrior who had fought the Mughal emperor Akbar five centuries ago, the Bhim Army organised a mammoth protest demonstration in the national capital in an effort to arouse the nation’s conscience.

This outfit had not been heard of before. Therefore, its ability to mobilise young dalits in such numbers cannot but be a wake-up call to society and political leaders of every hue.

The rise of the Bhim Army — apparently at such short notice — appears to signify the rise in rebellion of the young dalits of UP, much as the dalits of Gujarat stormed the barn under the leadership of young Jignesh Mevani, a graduate of English literature and lawyer, after last year’s reprehensible Una episode. The icon of the Bhim Army, Chandrashekhar, is also a young lawyer who was, ironically enough, aligned to the BJP’s student wing ABVP as a student.

The Bhim Army is not preaching an armed uprising and is perfectly within the law. Its aims are less spectacular and therefore more difficult to attain — a secession from caste prejudice, using the mantras afforded under India’s Constitution. But the anger of youth, unless harnessed to higher goals, can take unpredictable turns if society fails to apply the needed salve, if political leaders cannot summon wisdom. In Maharashtra of the early seventies, it had been imbued with revolutionary attitudes and an urge towards militancy under the umbrella of the Dalit Panthers, who were inspired by America’s Black Panthers. The late Rohith Vemula of Hyderabad, Mevani of Gujarat and Chandrashekhar of UP will not remain islands if the State persists with appeasement of caste and communal prejudices.