The situation calls for sustained support to the people of West Bengal, not least among them newly-returned guest workers 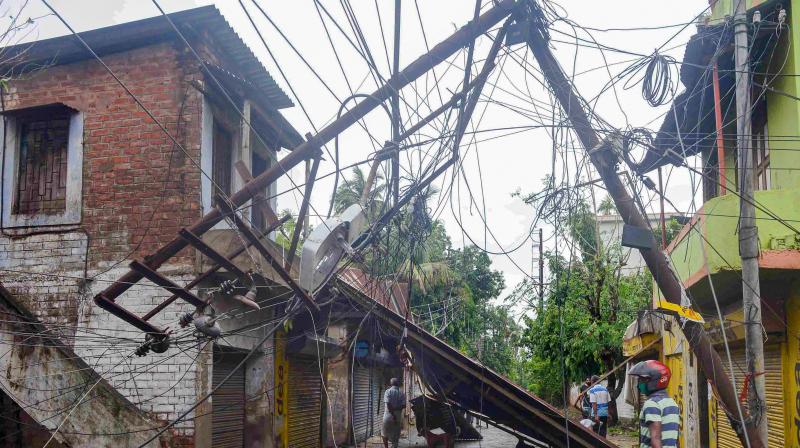 The toll would have been higher had the authorities both in West Bengal and Odisha not evacuated over seven lakh. PTI Photo

Have you marked yourself safe from Amphan on social media? It is reassuring if you have, because that would mean that you have had your power lines working, were able to access the Internet and, importantly, had a roof over your head, so you did not have to be otherwise engaged, protecting your mobile phone from the rain or your person from trees, roof sheets and other flying objects dislodged by a storm that hit tearing windspeeds of 185 kmph.

Now imagine the state of the 33 million people living in the path of Amphan, especially those in the three worst-hit West Bengal districts of East Midnapore, North 24 Parganas and South 24 Parganas — Odisha this time was spared the worst — leading to an official death toll of 84 people, the youngest being a teenager whose skull was crushed by a concrete slab. The 270-year-old great banyan tree of the Indian Botanic Gardens, Kolkata, is no longer the one with the world's largest canopy. Entire villages have been flattened; crop and newly harvested grain alike destroyed.

The toll would have been higher had the authorities both in West Bengal and Odisha not evacuated over seven lakh. But now the Prime Minister's much-vaunted visit, which awakened many of the major media houses in India to the seriousness of the news seeing as that there had been little coverage till that point, has yielded only Rs 1,000 crores in terms of immediate relief. Families of the deceased will get Rs 2 lakh each while those who lost limbs will get a pittance of Rs 50,000.

The measure is a rather sickening reminder of the Prime Minister Development Package that was announced following the Jammu & Kashmir floods in September 2014. Of the Rs 1,200 crores sanctioned under the package, only Rs 1,024.07 crore was in fact released to the affected. The losses of Amphan are expected to cross 50-fold that amount. Twenty-two Opposition parties have urged the government to declare Amphan a national calamity. Add to that the economic paralysis the state is currently experiencing amid a two-month-long lockdown the results of which now face a very real risk of being jeopardised as there is no way to ensure social distancing at the shelters housing lakhs of evacuees.

The situation calls for sustained support to the people of West Bengal, not least among them newly-returned guest workers as well as the millions of Amphan-hit who find themselves left suddenly bereft of either a livelihood or property. But governor Jagdeep Dhankhar is busy obstructing a chief minister who has only been demanding her rightful share of Covid assistance along with her counterparts in Kerala, Punjab, Rajasthan, Chhattisgarh and Puducherry.

With its wholly opaque management, the PM-Cares fund has nevertheless been generously contributed to, thanks to a rule that states all donations to it will be covered under the donor's CSR (corporate social responsibility). Speculations regarding its purpose aside, what use is it of anyway, if not deployed on occasions like these?

Will West Bengal again be victimised for not being ruled by the BJP? That’s the burning question on every non-partisan mind.