AA Edit: Kudos for self-reliance, but priority is handing out cash

Sadly, the efforts the government has made to manage the headlines do not seem to square with the horrors seen on the road 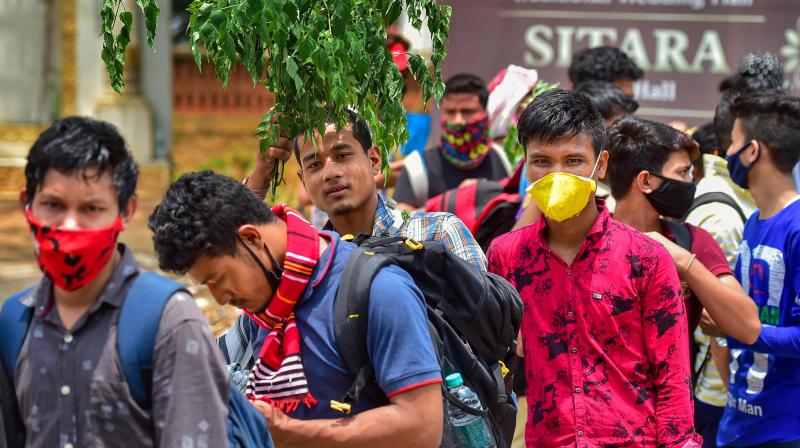 A stranded student from northeast holds a leafy branch to protect himself from scorching heat. PTI Photo

Satellite images of some of the Indian roads now would reveal the state of the Union — a lot of its citizens are on the move. Those thousands were working in the micro, small and medium-size enterprises, agricultural fields and construction sites far away from their homes. Lockdown rendered them desperate: jobless, shelterless and futureless, and has them trek back on foot to their villages. No government can possibly overlook the sight, reflected in the speeches of Prime Minister Narendra Modi and finance minister Nirmala Sitharaman. So, naturally, everyone expected the Rs 20 lakh crore Atmanirbhar Bharat Abhiyan Mr Modi announced last week would have something to force them to stay back where they are. But Ms Sitharaman who on Sunday completed her marathon five-day series on the package gives the impression that India has a government that looks beyond those human beings and seeks to build a future for the rest.

True, the Abhiyan project addresses a lot of issues that have been in discussion for long. India may have to liberalise sectors such as coal; share advances made in space science and technology with the new entrepreneurial class; the small and medium industries must be able to compete. True, the restrictions on air traffic may have to be eased to make resource utilisation optimal. But that can hardly be the matter of prime concern for a government of a country whose citizens are fleeing hunger in their thousands and dying by the dozen on the roadside, the matter making international news. That has not been the way the world has addressed this issue.

The United States’ $2 trillion relief package involved direct relief for every eligible adult, a separate fund for businesses, cities and states and another for small businesses. The Australian government pays wage subsidies of A$1,500 every two weeks per employee to help struggling companies retain their employees as part of a $80 billion package. Germany’s $808 billion package has a $55 billion fund to make direct payments up to $15,000 to employees of small businesses and the self-employed; its $10 billion fund aim at helping out companies on easier terms. Half of Japan’s emergency budget of $240 billion will go to residents as cash payout. Of Britain’s £100 billion plan, roughly £9 billion will be spent on direct payouts. Compared with these, the Indian package contained direct payment that varied from Rs 500 to Rs 1,000 plus grains and pulses to every citizen; and payment of provident fund share of employees in small scale industries.

That the measures and repeated appeals by the Prime Minister have not stopped migrant labour from walking suggests that they have lost confidence in the system. This is dangerous, and must be reversed. The government must get its priorities right. Yes, we want to build a $5 trillion economy in five years, but democratic decency demands that the poorest of the poor are part of it. Sadly, the efforts the government has made to manage the headlines do not seem to square with the horrors seen on the road.