The legislature belongs to the people’s reps and is run by the speaker, not the governor 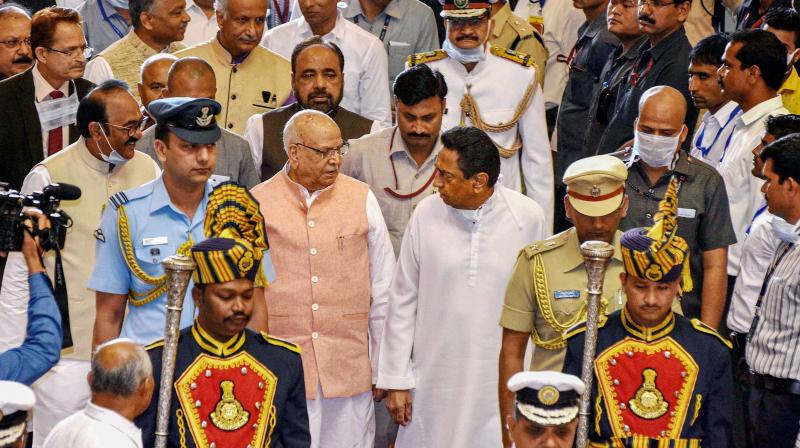 In the midst of a coronavirus pandemic and an economic free-fall that will lose, due to Covid-19, another one per cent of GDP growth (according to a former economic adviser to the Prime Minister) from an already anaemic 4.5 per cent — some say even this is inflated — the government is focused on toppling the Madhya Pradesh Congress government led by chief minister Kamal Nath.

The first step was to lure Jyotiraditya Scindia away with the promise of a government bungalow, expecting that the 22 MLAs loyal to him would leave the party and thus bring down its government. Six MLAs resigned and 16 are quarantined by BJP minders in Bengaluru. As the next step, governor Lalji Tandon on Saturday night — around 1 am Sunday, to be precise — asked Nath to prove his majority on Monday itself. He was avowedly keen on upholding constitutional norms, not something BJP-appointed governors are famous for.

However, Kamal Nath is no amateur and speaker N.P. Prajapati did what was expected of him — he postponed any trust vote till March 26, citing Covid-19 fears. This presumably gives the CM time to do some MLA management of his own; like coaxing rebels to stay in the fold. The BJP has approached the Supreme Court which, in keeping with its recent harmonious alignment with the government, said it would on Tuesday hear the BJP’s plea for a floor test within 12 hours.

Our Constitution is clear on the demarcation of domain. The legislature belongs to the people’s representatives and is run by the speaker, not the governor. The courts can adjudicate on constitutionally grey areas but here there are none. The governor would do well to remember that his post is merely that of a constitutional placeholder, as was eloquently elaborated over the weekend by Goa governor Satya Pal Malik.