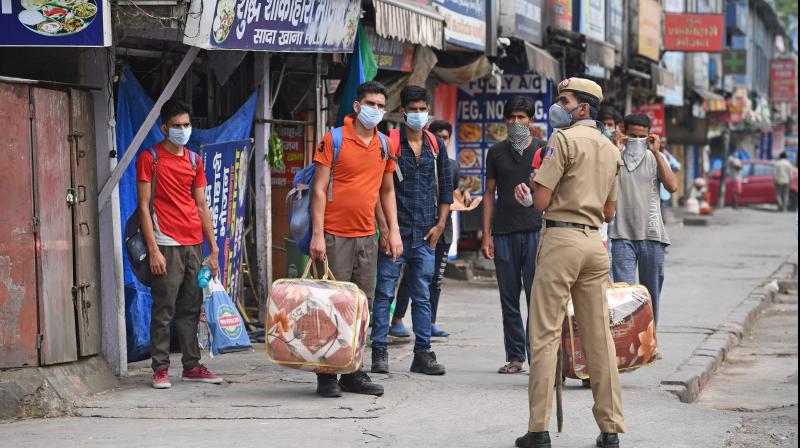 The government has not heeded the cash-strapped states’ demand for raising their borrowing limits but announced a massive hike of more than 50 per cent in its own numbers. AP Photo

India is hardly a week away from ending the nearly two-month long national lockdown and the picture that emerges now is not that of a confident nation that has achieved the target it had set for itself in the fight against the pandemic Covid 19 and has prepared a cohesive and comprehensive formula to take on the future challenges; it is that of a confused one which has covered little distance during the period and is taking decisions at cross purposes, instead. True, the virus has landed humanity in an unprecedented mess and an escape has no tested route. A unity of purpose would have been at least reassuring but it’s sadly missing. The latest in the series is the decision to run 15 pairs of long distance multi-stop trains with air-conditioned coaches. The Central notification in force now mandates that all inter-state passengers undergo a 14-day quarantine and the states ensure its compliance using the data base they create when passengers apply for passes. Multi-stop trains are highly likely to derail the entire process as the states have little say in the number of people who arrive at their borders or their whereabouts. A coordinated effort, not a surprise announcement, was the need of the hour. It defies logic that the railways has chosen to run air-conditioned coaches as the chances of a single infected person spreading the virus to others in a closed environment are high. It is not clear how the passengers will reach the railway station to board the rain or proceed from their destinations once they reach there as metro cities such as Delhi, Mumbai, Ahmedabad and Chennai are in complete lockdown with no public transport available.

It is not the first time that the government acted in a haphazard manner and the pattern that emerges is that of a mechanism with little understanding of the challenges on the ground. A major share of the migrant labourers who have been stranded now are employed in the small and medium segment industries and their trek home could have been avoided had the government extended the sector a helping hand. But the government, despite several rounds of talks among the senior ministers and the Prime Minister, has not come out with a package, leaving not only the labourers but also the entire segment stranded.

The government has not heeded the cash-strapped states’ demand for raising their borrowing limits but announced a massive hike of more than 50 per cent in its own numbers. It launched a mission named ‘Vande Bharat’ to bring stranded Indians back from overseas but allowed national carrier Air India to charge return fare, which mocks at the term ‘mission’.  It keeps the operation of the PM-Cares fund under wraps at a time when every rupee counts. Taken together, the government offers the sight of a bewildered boy staring at an unsolved jigsaw puzzle. It’s time it took a holistic view of the situation which alone can help it solve the muddle.