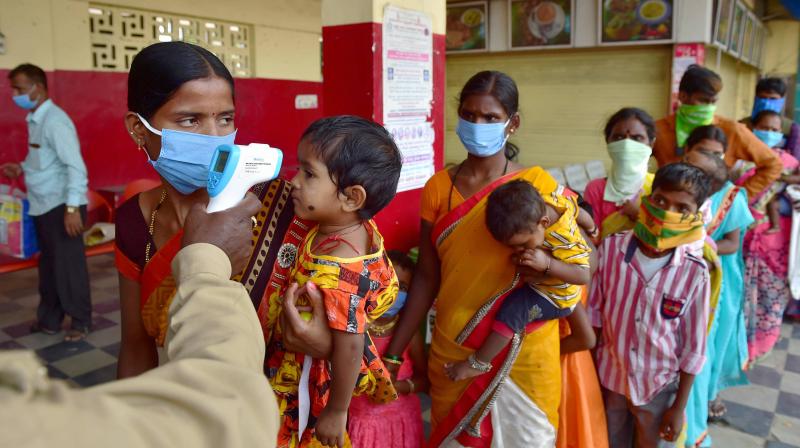 : Passengers undergo thermal screening before they board buses at KSRTC bus stand after Karnataka government eased the relaxation to allow inter-district travel by buses, during the ongoing COVID-19 nationwide lockdown, at Devanahalli near Bengaluru. PTI Photo

The plight of the guest workers has moved many people during this lockdown, but perhaps not the Karnataka government. In a surprise move, it transferred senior IAS officer and principal secretary of the labour department, P. Manivannan, without giving him a new posting, and replaced him with another IAS officer, Maheshwar Rao.

The transfer seems to have shocked many people within the government as well as the public. The order comes amid reports that Mr Manivannan had been speaking up for the rights of workers at a time when several sections of the industry were trying to get labour laws relaxed on the pretext that lockdown had severely hit the manufacturing and construction sectors. A lobby had been building up to bring in the UP model on labour laws as well.

Mr Manivannan had recently tweeted that the government would issue notices to the employers. According to sources, some ministers are not happy with the officer, which could have led to the transfer.

Interestingly, the officer’s transfer has set off a backlash — several citizens groups started an online campaign to pressurise the government to reinstate Mr Manivannan.

Usually, trainee IAS officers spend up to three months at state academies at the beginning of their field training. This year though, due to the coronavirus outbreak, they are being moved directly to the districts. According to sources, 96 trainee IAS officers out of 182 have departed the campus of Lal Bahadur Shastri National Academy of Administration in Mussoorie to begin their year-long field training as assistant collectors.

The newbie babus left for their postings in cars sent by their respective states to pick them up from the Academy. The remaining officers, who have been posted to farther states, are waiting for flights to resume to join duty.

The government felt that during this pandemic, it could use these young officers to help out in administration and data collection. The trainees have no legal power yet, but they can fill in ancillary roles. It is a baptism by fire, for the trainee babus who will soon be playing a crucial role in fighting the pandemic at the district level.

In charge of the nation’s 733 districts, district magistrates (DMs) have now emerged as the most powerful heads of civil administration, leading the charge against the coronavirus pandemic. To fight the virus, the Centre has invoked two laws — the Disaster Management Act, 2005, and the archaic Epidemic Diseases Act, 1897. These laws have been seldom used in the past, but these days these statutes have armed deputy commissioners, collectors or district magistrates (depending on the nomenclature in the state) with immense powers to administer their assigned districts.

According to sources, an order signed by a DM is far more effective on the ground than even one cleared by a principal secretary to the chief minister! They can now stall a project, requisition a vehicle or a hotel, restrict the movement of an individual, dispose of an unclaimed body and demolish a structure, among others. Due to differing interpretations by DMs, orders are likely to differ from one district to another, even as the Centre has started easing the lockdown.

One aspect of this situation is that since DMs have been given these wide-ranging powers under the two laws, there is little scope for local MPs or MLAs to pressurise officials on Covid duty, which has its pluses and minuses. But so long as the coronavirus crisis persists, few can challenge the powers of a district magistrate.