Aakar Patel | As BJP’s story evolves, will Bengal set tone for its future?

The story of BJP, which began in Bengal with Mookerjee, is poised to return to that state very soon 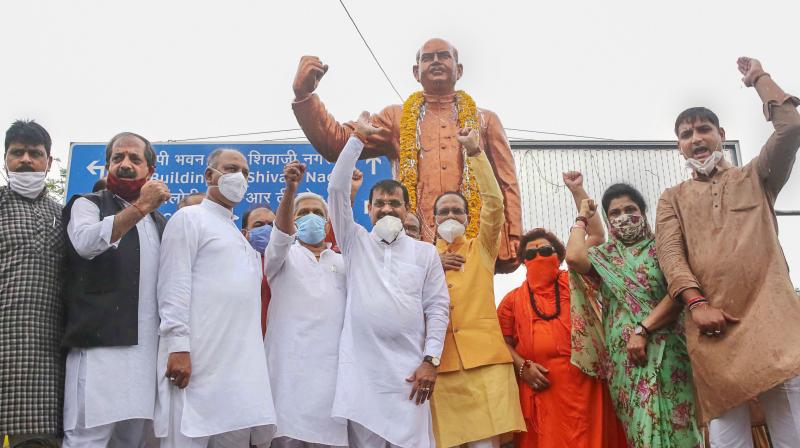 The BJP was formed in April 1980 after its members were expelled from the Janata Party, the joint Opposition force launched three years earlier to counter an authoritarian Indira Gandhi. One of its components was the Jan Sangh, launched in 1951.

According to its own record, the Jan Sangh was the result of three events. First, the death of Sardar Vallabhbhai Patel in December 1950, second, Syama Prasad Mookerjee’s resignation from the Nehru government, and the election, also in 1950, and subsequent forcing out of P.D. Tandon as Congress president. Tandon was seen as a Hindu conservative opposed to Nehru’s secularism, and after Patel’s death Nehru forced Tandon to resign.

Another event, also acknowledged by the Jan Sangh as important to its formation, was the banning of the Rashtriya Swayamsevak Sangh after Mahatma Gandhi’s assassination in 1948 and the arrest of its leader M.S. Golwalkar.

The RSS was not registered as a political organisation and the ban was lifted in 1949, on the condition that it adopt a constitution, that it agreed to do.

At this point, inside the RSS, and published in its mouthpiece Organiser, there began a series of articles arguing why the RSS should participate in politics. Golwalkar’s solution was to not make the RSS itself a political body but to allow workers to set up a party.

They joined S.P. Mookerjee, earlier head of the Hindu Mahasabha, and the Jan Sangh was formed with Mookerjee as its leader. Golwalkar asked some of his people to join the party’s structure, including Deen Dayal Upadhayay, who was a pracharak in Uttar Pradesh.

Later, Atal Behari Vajpayee and Lal Krishna Advani, who was writing film reviews for Organiser, were also asked to join.

The RSS was already a quarter century old at this point and had spread well beyond Nagpur. It was thus able to provide the necessary frame for the Jan Sangh to be present in several states at the point of its launch. Mookerjee was a former Cabinet minister but had a base only in Bengal. Mookerjee’s death in 1953 meant the RSS could take control of the party.

In India’s first general election the Jan Sangh won only a handful of seats and this continued till the 1970s, when under Vajpayee it merged into the Janata Party with the rest of the Opposition.

When Jan Sangh members were expelled and had to form a new party in 1980, Vajpayee rejected the call to rename it the Bharatiya Jan Sangh. He said they had learned from the experience of being part of a larger group.

The two changes that came from this was that first, the Bharatiya Janata Party (as named by Vajpayee) would expand its cadre and take non-RSS individuals, and second, the BJP’s constitution would differ from the Jan Sangh’s and would promise allegiance to India’s secularism and socialism.

This is still a unique feature in both the BJP’s constitution and the oath that it makes all its members sign.

This party also did not do well and got only two seats in the 1984 general election in which the Congress under Rajiv Gandhi demolished the entire Opposition. What changed the party’s fortunes was a movement started by the Vishwa Hindu Parishad to be allowed to pray at the Babri Masjid, where two idols of Ram and Sita were placed in December 1949.

The oath to secularism was ignored and under its new president L.K. Advani, the party adopted the VHP demand, though Ayodhya had been on the manifesto of neither the Jan Sangh, formed only months after the idols were placed inside the mosque, or the BJP up to that point.

The polarisation that Mr Advani produced in Indian society with his decision to pursue the Ayodhya project finally gave the RSS the sort of success it was looking for, and the BJP won 85 seats in 1989. It joined another coalition called the Janata Dal, but this time supported it from outside.

When the government collapsed, Mr Advani returned to the Babri issue, finally leading a mob in December 1992 which demolished it and over 2,000 Indians died in the riots that followed.

After the demolition and the violence, the party increased its popularity further and under Vajpayee, who was back in charge, it doubled its tally to 182 in the 1998 elections. It got stuck here, winning 180 in the next one in 1999, and then slipping to 138 in 2004.

The BJP had moved away from its Ayodhya and anti-Muslim positions substantially while in power. What changed was the riots in Gujarat in 2002, after which Vajpayee tried unsuccessfully to oust Narendra Modi as chief minister.

What happened next was the classic example of what takes place in ideological parties.

The leader is always vulnerable to the person who is more extreme than he is and is charismatic. Thus, after Vajpayee failed to wrestle Mr Modi down, the writing was on the wall. Mr Modi’s acceleration of the BJP away from its constitutional promise of secularism produced a profit and the BJP doubled again to over 300 seats in 2019.

The story of the party seems complex but in many ways it is quite simple. And the story, which began in Bengal with Mookerjee, is poised to return to that state very soon.