Farrukh Dhondy: In UK, it is rich who exit cities as Covid blurs Left-Right lines

In Britain the only movements one can compare to the exodus from Indian cities is the movement of rich from, London, to the second homes 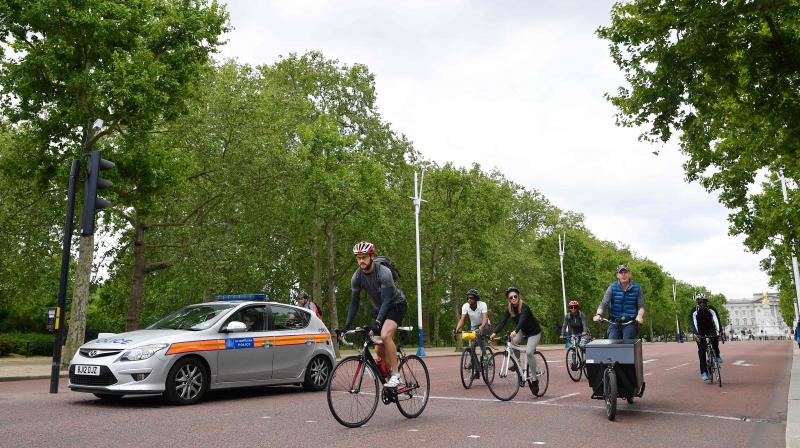 Cyclists ride along The Mall next to a police car near Buckingham Palace in central London on May 16, 2020, following an easing of lockdown rules in England during the novel coronavirus COVID-19 pandemic. AP Photo

“Japanese haiku
Should give up bullshitting, and
Just say ‘I love you’

Money is a vice —
A table, a chair, a pen
And paper suffice

Contact is a sin
Keep well away from others-
Bicycles are in!

Take a daily stroll
Keep arguments in good check
And booze in control”
— From Kaiku yeh Choothya Haiku? By Bachchoo

Every country in the world is contemplating how to get back to “normal” after the plague recedes. Most administrations making regulations attempt to calculate and strike a balance between keeping the Covid-19 death rate down and the minimising of damage to the economy.

The world awaits the new “normal”, not knowing what that will be. Isolated in London, gentle reader, not discontented with scribbling away, trying recipes with available ingredients, — sometimes successfully — exercising as the TV workouts prescribe, one listens to the unrelenting reports about this universal plague.

Yesterday, I saw footage of streams of people leaving Mumbai to walk along the highways to the villages from which they came. It has always been clear that the shanties of the large cities of India house the flood of people who have lost their livelihoods or are dissatisfied with life in rural India. These may be landless agricultural labour who have been displaced from the agro-economy by tractors, combined harvesters or other displacing factors; or they may be the families of the second, third and fourth sons of a land-holding which can, as the generations progress, feed only the family of the first son. The overcrowded shanties (I am avoiding the word “slums”) are then full of people seeking livelihoods of a radically different sort from those of their rural past.

It’s obvious that if Covid-19 is primarily transmitted from one person to another through proximity and through the surfaces which one infects and another touches, then all crowded spaces are exponentially more dangerous than open ones. Hence the exodus? Are these refugees from the cities carrying bundles of earnings with them? How will they sustain themselves in the villages to which they return? There must be relatives and family or caste networks willing to host them, but for how long? And will they return in substantial numbers to revive the life of the shanty as it was at New Year 2020? Will some racketeers and local mafia move into the empty spaces and impose some new dadagiri on the returners?

In Britain the only movements one can compare to the exodus from Indian cities is the movement of the rich from, say, London, to the second homes they own somewhere in the country. The countryside resents the presence of these foul-weather neighbours.

The amusing change is in the compelled alteration of the ruling party’s traditional ideology.

Right-wing commentators, in normal times and through the decades and even the ages, have all agreed that one of the central tenets of Conservatism is the light touch of government. The veneer of this ideological principle is the freedom of the individual from the arm of the law which should be kept as short as possible. In reality this means that their profiteer friends and supporters get away with not paying taxes, with owning vast enterprises and that their governments make stringent rules to suppress the demands of unions and keep the wages of workers, such as nurses, as low as possible.

Now of course, the light touch has turned into the heavy hand. The crybaby commentators of the right, in several publications are even likening the lockdown, “suggested” rather than legislated for by the Tory government, to the reign of the STASI in communist East Germany. Poor BoJo and his government, the would-be Churchills, are being castigated for their absolutely common sense, if inadequate, lockdown regulations, to Stalin.

That’s not the only reversal of this particular Tory formation. The corona crisis has revealed the hypocrisy of ministers such as Michael Gove who, throughout the Brexit campaign maintained that “experts” should not be listened to as to the economic consequences of leaving the EU as he, with the fairies at the bottom of the garden talking to him, knew best.

Now he appears at the lectern, which ministers use while addressing us, as though preaching from the pulpit, to say that all government decisions follow the recommendations of “experts”. He may argue that economics is not as scientific as epidemiology but, considering the varying, even diametrically-opposed, views of some of the scientific groups on Covid, this is manifestly absurd. The hypocrite label sticks to Gove’s forehead.

And so with BoJo. During the Brexit campaign when business leaders said that Brexit would be a disaster, he publicly said “F—k Business.” Now, trying to wrestle with a permanent recession in Britain he can’t maintain that attitude and has to pander to opinions of those he proposed to shaft. Ho ho!

The most obvious deviation from the Tory small-state policy is that of the Chancellor, Rishi Sunak. He has, by paying a majority of Britain’s workers some proportion of their wages for staying at home and not working during the lockout, put lives over profit-motive. Any communist regime would be proud to have him as head of the Politburo or even as Supreme Leader. Rishi has gone further. He has pronounced that the state will pay workers till October, but from that date capitalists, owners of business, would have to contribute to this wages bail-out.

This is perhaps the closest that the Tory government will get to ‘F----ing Business’ and it would have been something that Jeremy Corbyn’s Labour party may have implemented if they had won the election.

Now Rishi, with these measures, is being seen as someone who is bound to gain popularity among the general population and be seen as a future Prime Minister. My prediction is that he won’t be allowed. Tory commentators will soon characterise him as an infiltrator from the UK Marxist Liberation Front, the North Korean politburo, or some such.