Chandrajit Banerjee: How to restart economy in a way that’s safe and sustainable

With companies shutting shop as a result of the lockdown, the corporate performance outlook for the current financial year looks bleak 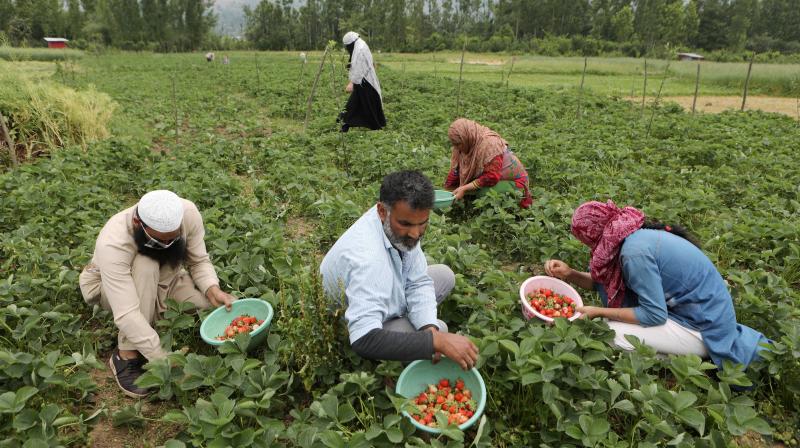 r: Farmers harvest strawberries in a field, during the ongoing nationwide lockdown to contain the spread of coronavirus, in Srinagar, Wednesday. PTI photo

The Narendra Modi government’s decision to impose one of the strictest lockdowns worldwide, which has now been operational for close to 50 days, has augured well to flatten the curve on casualties in India, but it is bound to have some serious implications for the economy. The jury on the debate over lives and livelihoods is still out in the open, but urgent action will now need to be taken to get the economy back to a safe and sustainable start.

With the nationwide lockdown further extended till May 17, though with considerable relaxations in the orange and green zones, industry is now trying to find its way around the new normal. This is because, despite these relaxations, it will take a while to put in place the requisite checks and balances for getting full capacity on board. Add to that, industry is also facing a major challenge with respect to the availability of workers to recommence their operations.

These sentiments were echoed by more than 100 top industry leaders in a survey conducted during the special meeting of members of the CII national council 2019-20 held recently. Most of the CEOs (around 90 per cent) predict a fall in GDP growth in 2020-21. Of this, a large proportion of the respondents (38 per cent) anticipate that the fall in growth will lie in the range of minus one to minus two per cent; while 36 per cent feel it will fall even below minus two per cent. This spells out the urgent need for a fiscal stimulus package from the government, one which will herald a sharp recovery from the current abyss.

With companies shutting shop as a result of the lockdown across the country, predictably, the corporate performance outlook for the current financial year looks bleak, according to the CII’s survey results. A major proportion of respondents (32 per cent) expect their topline to contract in a range of 15-30 per cent, closely followed by an almost similar proportion of respondents (30 per cent) who foresee a 0 to 15 per cent contraction, confirming the slowdown in the economy. Immediate measures are therefore required to give some relief to help the corporate sector recoup some of its lost ground.

It has been suggested that all industrial units, including in non-notified industrial areas and standalone units, be allowed to function in urban areas. In addition, the issues related to the availability of the workforce at factory sites also need to be streamlined and resolved with the utmost urgency to enable industries to resume operations. To alleviate their liquidity stress, we suggest that the banking system could step in by providing additional working capital limits, equivalent to the April-June wage bill of the borrowers, backed by a government guarantee, at 4-5 per cent interest.

The Covid-19 pandemic has induced a big external shock as well, with two of India’s biggest export markets – the European Union and the United States -- having seen extended period of lockdowns. This could inflict a further body blow to the companies which are already struggling with insipid demand conditions domestically. The survey results spell out the concerns of respondents, with nearly half of them (49 per cent) expecting exports to contract in the range of 0-15 per cent in the current fiscal. This will be especially detrimental to the prospects of companies that depend considerably on foreign trade. To alleviate their stress, as an immediate measure, exports should be classified under essential services so that they can operate with free movement of cargo across states. In addition, the interest subvention scheme currently available for MSME exporters could be extended immediately, apart from broadening its scope to include all exporters.

A significant majority of respondents (81 per cent) have indicated that they have faced problems in credit offtake from banks and NBFCs. To help banks tide over their risk aversion and lend to productive sectors of the economy, it is suggested that banks be assured of a government backstop either in terms of recapitalisation or a government guarantee on loans.

The other issue which the survey highlighted has been with respect to the anticipated job losses. A large proportion of respondents (39 per cent) expect a 10-20 per cent cut in jobs, closely followed by 32 per cent of the respondents who foresee a less severe 0-10 per cent decline in jobs.

For starters, it is important that labour-intensive sectors such as manufacturing and construction are accorded priority in any policy framework being worked out to fight the slowdown induced by the pandemic. This is crucial since any losses in jobs and livelihoods are likely to have dire implications on the level of poverty and hunger and reverse many of the gains made by the country in all these areas.

Given the precarious state of the economy and the impact on livelihoods, it is important the government steps in urgently with a comprehensive package that addresses the issues of MSMEs, stressed sectors, liquidity and the common man.