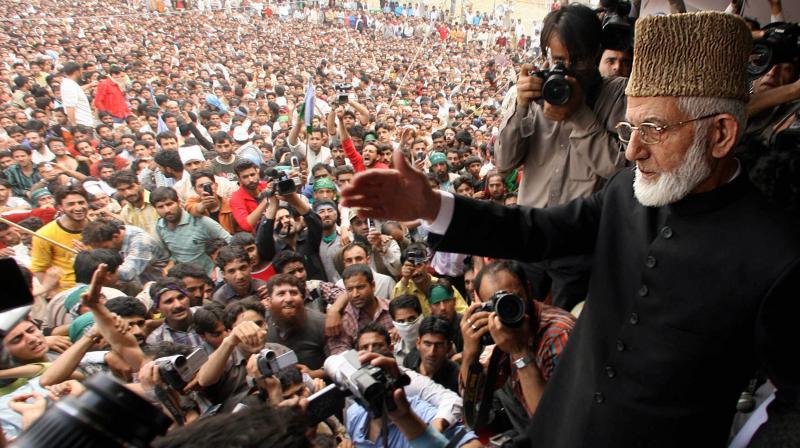 In this file photo dated Thursday, June 12, 2008, of Syed Ali Shah Geelani waves at a crowd, in Srinagar. Geelani, the lifetime chairman of the pro-Pakistan Hurriyat Conference, made a surprise announcement of completely dissociating himself from the 16-party amalgam. PTI Photo

On the Kashmir stage, the cast of characters has suddenly been hit by an absence -- that of the ailing, 91-year-old Syed Ali Shah Geelani.

The hawk who abruptly removed himself from the proscenium last week, sending shockwaves across Kashmir and in the Pakistani security establishment, has been the dean, as it were, of pro-Pakistan tendencies in the Valley for decades.

When Pakistan’s Inter-Services Intelligence orchestrated the 1989-90 move to constitute and strengthen Hizbul Mujahideen as the armed, local wing of the “integrate-with-Pakistan” factions of Kashmiri separatism, that mainly owes allegiance to Jamaat-e-Islami ideology, by brutally suppressing and eliminating the pro-Kashmiri independence JKLF, until then the Valley’s frontline armed group enjoying Pakistan’s active support, it is to Geelani that Pakistan’s Deep State turned for benediction.

Until his shock resignation last week from the All Parties Hurriyat Conference (Geelani) that he created in 2003 (and was its “chairman for life”) out of the broader Hurriyat umbrella, the stalwart, who possessed charisma, had enjoyed undoubted prestige, although not popularity.

And yet his leaving the scene could have the portents of being a transformative phase in Kashmir’s politics, much of course depending on how New Delhi negotiates the post-Geelani landscape.

Popularity eluded Geelani because Kashmiris, who are mainly Muslim, are on the whole against the idea of Kashmir being territorially or politically linked to Pakistan, strange as this may seem to the BJP-RSS. But they saw the pro-Pakistan patriarch as being steadfast in his beliefs, unlike most Valley politicians.

Also, unusually for a top separatist leader, Geelani was elected three times (the last in 1987) to the J&K Assembly. This partly explains his prestige and charisma, and the charge of having no base cannot be easily flung at him, unlike other leading separatists.

The Mirwaiz and Geelani factions of the Hurriyat had no popular leaders in their ranks. But protest calls by them were generally obeyed at the public level. This is for two seemingly contradictory reasons.

One of them is the fear of the gun. Pakistan-backed armed groups backed some Hurriyat constituents and there was the fear of incurring their wrath if the strike calls were disregarded.

The second is that, for a variety of reasons to do with the perception of erosion of the promised constitutional autonomy enshrined in treaty terms (which was wholly ended by the BJP government on August 5 last year), the presence of the security forces in increasingly large numbers over time, raising human rights concerns, as well as mass unemployment, Kashmiris are up for protest and are relatively easy to mobilise in that direction. They have an aggravated sense of victimhood.

Since the mainline parties have been in and out of government, the protest aspect of public life in Kashmir has been a virtual monopoly of the Hurriyat factions. Even so, there is an inbuilt dichotomy here.

Top Hurriyat leaders of both factions are seen by the wider public as having done extremely well by themselves, amassed wealth, sent their children out for good education while expecting ordinary people to make inordinate sacrifices all the time --through general strikes and mass actions that invite intervention by the security forces, leading to all manner of problems and the disruption of life.

Therefore, when a Hurriyat leader falls foul of the authorities, is taken for questioning or sent to jail, the ordinary Kashmiri is apt to rejoice (quietly, never publicly) for having received his just desserts.

And yet, there is a complexity that cannot be overlooked, a serious conundrum: Is sustained people’s protest possible if the separatists did not exist? (Incidentally, all those who marched to the protest tunes of Geelani or the Mirwaiz may not subscribe to their fundamental beliefs and ideologies.)

This question appears to speak to the split public personality in the lives of the people of Kashmir, and yet points to a larger truth -- to the grand idea of politics in the Valley, and the channels of its articulation outside of the periodic voting exercise to elect MLAs, MPs or municipal councillors, for which the people of Kashmir turn up in respectable numbers (frequently in the face of shootings and bombings), which is yet another important face of the complex reality of Kashmir.

It is due to the associational link between the politics of protest and the availability of the idea of the Hurriyat that the resignation from public life of an ailing 91-year-old man sets the wider stage for a contemplation of the possibilities of Kashmir’s future politics in a way that was not there earlier.

Had Geelani pleaded ill-health as his reason for quitting, the boat would not have been rocked. But in a fairly explicit departure statement (and a video on social media) the nonagenarian cited corruption in the Hurriyat’s Occupied Kashmir unit and its endorsement by the Valley unit.

This seems to signal intense faction-fighting not just in the political platforms shaped by  Geelani (with Pakistan’s shadowy backing) but possibly also at senior levels of the Jamaat-e-Islami, which is really the ideological parent of all such groups.

The people of Kashmir are bewildered. They also have a question for the two Hurriyat factions -- Geelani’s and the Mirwaiz’s. Why did they not bestir themselves after the Union government ended J&K’s autonomy in August 2019, igniting the politics of protest, although many of them were not taken into preventive custody, unlike mainstream politicians, who were all put in prison or placed under house arrest?

If faith in the principal articulators of protest politics has been shaken (at least for now),  it is not inconceivable that the mainstream parties -- the National Conference, PDP and Congress -- will benefit as a result, bringing the prospect of some relief, provided the Centre does not continue to suppress these parties in various ways.

If Geelani and his brand of politics reflected Muslim communalism, the BJP-RSS’ brand of Hindu communalism has been a spectre in J&K in recent years.

In the absence of the Geelani school of politics, this latter brand may be tempted to try and prevail through force and continue to suppress Kashmir’s mainstream politicians and their parties through the misuse of state power. This will be a serious mistake from the perspective of nation-building.