Meet Sandor Gonzalez: Artist who sketches under the sea

Cuban artist sketches under the sea among fish and coral reefs. 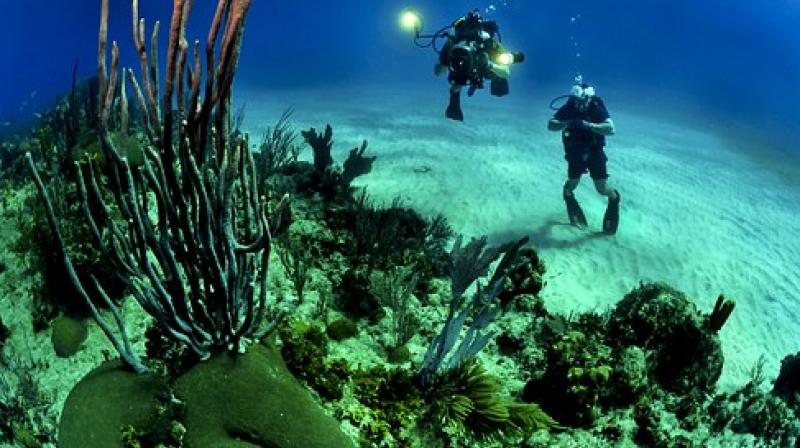 The Cuban learnt to then soak the canvasses for at least an hour and rinse them to get rid of the salt and any organic matter, before hanging them out to dry. (Photo: Representational/Pixabay)

Cuba: Some artists like to go on a countryside retreat to foster their creative process. For Cuba’s Sandor Gonzalez, there is no better place to sketch than several meters below the surface of the sea, surrounded by iridescent Caribbean fish and fantastical coral forms.

The 42-year-old first won renown at home and abroad for his predominantly black-and-white, haunting images of imaginary cityscapes, inspired by a trip to Europe and reflecting the aggressiveness of modern, urban life.

Then six years ago, he went scuba diving in Cuba and found his inspiration in the complete opposite: the tranquillity found below water where all forms are natural and not manmade, all sounds are muffled and the light ripples softly.

While Gonzalez had heard of a biologist painting underwater in Spain, he decided to experiment for himself until he found a way of sketching with charcoal or oil paints which unlike pastels or watercolour would not dissolve.

The Cuban learnt to then soak the canvasses for at least an hour and rinse them to get rid of the salt and any organic matter, before hanging them out to dry. “This started off as a hobby, as a passion,” he told Reuters at Punta Perdiz, his favourite dive spot, sheltered in the Bay of Pigs, where in 1961 US-backed Cuban exiles landed in a failed attempt to overthrow Fidel Castro.

“But now I really need to come here, immerse myself and create below water because there is a peace there that you simply cannot find on dry land.” To do so, he gets fully kitted out in scuba diving gear including an oxygen tank and yellow flippers, and swims out 60 meters (197 feet) to his easel fixed in the seabed around 6 meters (20 feet) below the surface.

With him, he carries his canvas, and other equipment like a spatula for the oil paints weighed down with some lead to avoid it floating to the surface if he lets go. The artist said he does not plan beforehand, instead allowing inspiration to strike as he enters a meditative state in the crystalline water. But inevitably his submarine work is more about nature than the cityscape series he continues to develop on land.

Being reliant on a tank limits the time underwater, but Gonzalez is quick and for this interview sketched in 30 minutes a flying whale, dragging a house behind it in a sky dotted with clouds. Palm trees grow off the creature’s back.

“I really did not expect to see somebody under water, painting!” exclaimed Canadian tourist Mike Festeryga, who saw Gonzalez while diving along the seabed. The state-run dive center at Punta Perdiz, on Cuba’s southern coast, some 172 km (107 miles) from Havana, said his work was an extra draw for tourists.