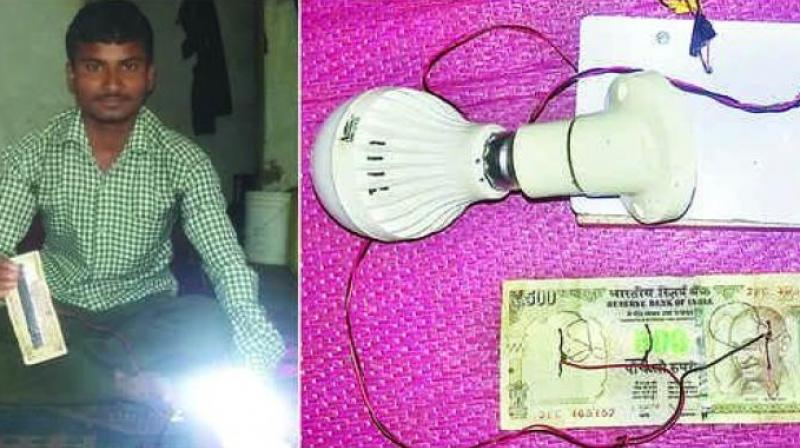 Dundi is an Intermediate science student of Khariar College in Nuapada district of Odisha (Photo: YouTube)

Bhubaneshwar: As political parties confront each other over the scrapping of high-value Rs 500 and Rs 1,000 notes, an Odia youth has claimed to have produced electricity ‘using’ the demonetised Rs 500 notes.

Lachman Dundi, an Intermediate science student of Khariar College in Nuapada district of Odisha, on Wednesday claimed that he succeeded in producing electricity using the silicon present in the old Rs 500 notes.

“On exposing these notes to sunlight or any other form of light, the silicon produces electricity. A silicon plate is needed to be attached on one side of the note,” he said.

The exposure to sunlight produces 5 volts of electricity. The note needs to be connected to a transformer with an electric wire that would produce 220 volts that can light an electric bulb or rotate a fan, he claimed. “We can use the electricity for 24 hours if it is stored in a battery,” he added.

Lachman also claimed the possibility of operating cycle and generator through energy produced from urine. He has sought government assistance to see his dream projects being exploited fully.

Son of labourer couple Tirtha Dundi and Suadei Dundi of Kotamal village under Khariar block, the unsung genius is managing his study expenses by selling LED bulbs assembled by him in the local market.

After the demonetisation move, he experimented with a scrapped Rs 500 note which he had to reach his conclusion. Pravat Kumar Parija, a science teacher at Shree Maa Girls’ High School, Kendrapara, said the solar panels that produce electr-icity are made up of a series of interconnected silicon cells joined together to form a circuit. If the Rs 500 currency note has really got a coat of silicon on it, it can be used as solar cells to produce electricity.

“It needs to be scientifically examined if the scrapped Rs 500 note has any coat of silicon on it. If it has really got a coat of the metal, it can be used for producing electricity,” he said.