Easwer said that the right wing is not against 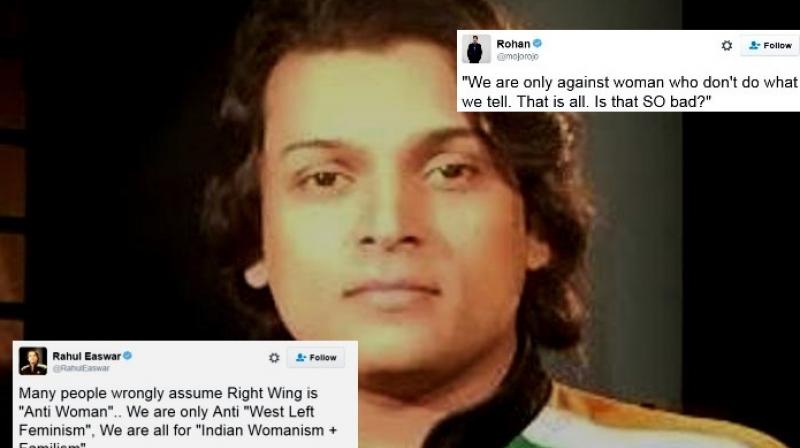 Amid rising support for feminist ideas from various quarters, there are still some including celebrities who continue to get it wrong while several in India oppose it in the name of “defending culture”. In India, the push for gender equality gender equality is constantly battling patriarchal values in the society.

The latest “media personality” to voice opposition to feminism is right wing activist Rahul Easwer, who says that he isn’t anti-woman, but simply anti-feminist.

See Dear Right Wingers in Twitter, Dont be Shy to Oppose #Feminism ; Create our own Counter Narrative of Indian Womanism & Familism. Be Bold

While you might be wondering what he exactly meant there, Rahul Easwer went on a streak of making up terms to put his point across, as he said that the right wing was against “Left Western Feminism” and that he supported “Indian Womanism + Familism”

Many people wrongly assume Right Wing is "Anti Woman".. We are only Anti "West Left Feminism", We are all for "Indian Womanism + Familism"

It might be a tough task to wrap your head around so many new ‘isms’ invented by Easwer, Twitter was as usual quick and ruthless when it came to taking Easwer to task.

"We are only against woman who don't do what we tell. That is all. Is that SO bad?" https://t.co/zG7OAGlksK

Basically, as long as you submit to patriarchy you are golden. This is not right wing, it's retard wing. https://t.co/9iJfHTnuGR

So the refusal of marital rape as rape comes under "Indian Womanism + Familism" , am i wrong? https://t.co/XJ2OT63N8y

"Indian womanism" & "Familism" which may basically mean the rotis should be gol. https://t.co/vEbtHS6bhW

'Many people wrongly assume that I am anti feminism. Well I am. I just hide it by making up words like "Familism".' https://t.co/Bjt2DnxHEu

Even as people keep failing to understand that feminism is basically all about gender equality, the movement is progressing in India despite opposition from a patriarchal mindset.