Tughlak Road is the residence of a “naamdar neta” in Delhi where funds are being sent, Prime Minister Narendra Modi said. 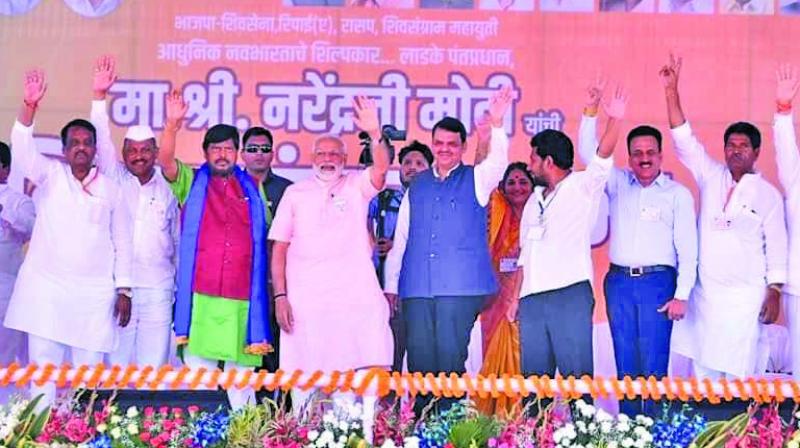 Mumbai: Prime Minister Narendra Modi has appealed to the people to eliminate Congress and its allies permanently in order to eliminate poverty in the country. He asked voters to choose between the ‘imaandar (honest) chowkidar’ and ‘bhrashtachari (corrupt) naamdar.’

Mr Modi's comments came in the backdrop of Congress president Rahul Gandhi's repeated jibes of “chowkidar chor hai” aimed at him for the alleged irregularities in Rafale jet deal. To counter it, the PM has been calling the Congress chief a 'naamdar' (dynast).

“You have seen that the chowkidar's government is strong and takes decisions. Scams and decision-making delays were the order of the day during the remote-controlled government earlier,” Mr Modi said.

“During the UPA rule, bomb blasts were frequent in which farmers, middle class people and traders were killed. Blasts happened in trains, buses and stations. But where are the blasts under the chowkidar’s rule?” he said.

“This is because the chowkidar has instilled fear in the minds of terror perpetrators that even a single mistake would prove costly for them. The chowkidar will find them from hell and punish them,” the Prime Minister said.

Reaching out to first-time voters, Mr Modi said, “Those born in the 21st century will be voting for the first time. Do you agree with the weak approach of previous governments and their compromising of national security? Is this acceptable to you?” Mr Modi said he has been able to work on various development projects, including farmer's welfare because of people's support.

Tughlak Road is the residence of a “naamdar neta” in Delhi where funds are being sent, Prime Minister Narendra Modi said.