According to forest officials, there have been several cases of illegal entries at Yeoor forests. 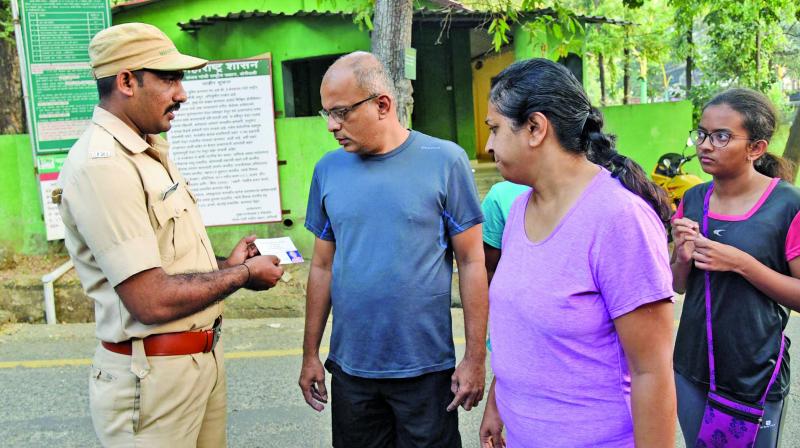 An official shows the pass to a group of walkers at Yeoor forest on Sunday. (Photo:DEEPAK KURKUNDE)

Mumbai: Two days after a leopard cub was rescued from Yeoor forest, the forest department has issued a notice urging citizens to carry a pass for morning and evening walks from December 9. In case people are found without a pass, they will be fined Rs 25,000 or imposed a three-month imprisonment. However, activists said that the forest department should also work towards removing illegal structures and turf clubs that continue to disturb the wildlife in the vicinity.

According to forest officials, there have been several cases of illegal entries at Yeoor forests. “Some people sneak into the forest and litter. Miscreants drink on the premises and leave behind liquor bottles. It is important to regulate the entry of people,” said a forest official.

Rajendra Pawar, a range forest officer, said that the entry pass for all visitors is mandatory and the new notice is only a reminder to them. “This is to restrict the entry of miscreants into the forest. The entry pass for joggers does not cost much. It is only around Rs 200 for the whole year,” said Mr Pawar. He also added that the entry fee is based on the policy adopted by the Sanjay Gandhi National Park.

Meanwhile activists highlighted that despite a 2016 notification by the Central government stating Yeoor to be an eco-sensitive zone, illegal structures still remain intact inside the forest area.

“There are at least six turf clubs operating illegally in Yeoor. Even parties are hosted in bungalows and private events have been taking place in turf clubs. The floodlights and noise can disturb the movement of wildlife. However, no action has been taken on the matter. The guidelines of eco-sensitive zone should be implemented,” said  Rohit Joshi, a Thane-based activist.