Mahesh Atra got stuck between train and platform at Borivali. 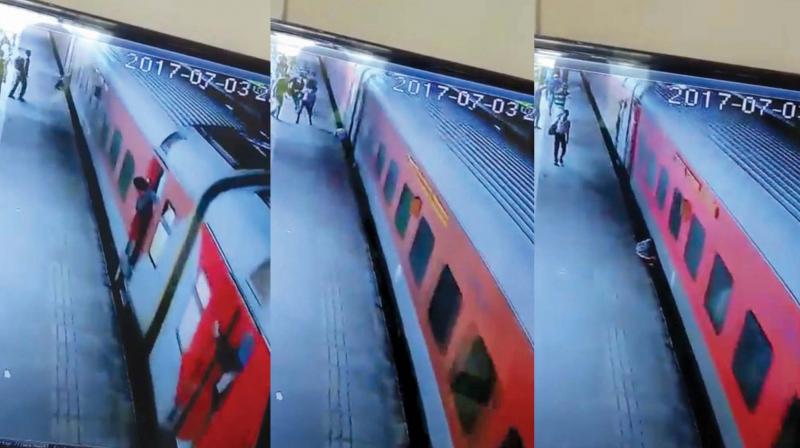 CCTV footage shows the man rolling several times before being crushed on platform of Borivali station.

Mumbai: A spine-chilling video has emerged of a man spinning 13 times between the footboard of the Gujarat Mail and the platform of Borivali station before getting sucked under the train and being crushed to death.

The incident, which was captured by closed-circuit television (CCTV) cameras, shows Mahesh Atra (40), trying to get into the express train after he got off to get water on July 3. The incident took place around 11.05 pm.

Railway Police Force (RPF) officials said Atra was carrying change of Rs 100 in one hand and a plastic water bottle in the other. His decision not to put the change in his pocket and leave one of his hands free to grab the pole located near the train’s door led to his gruesome demise, they said.

Atra, a resident of Ahmedabad, is seen in the video struggling to get into the train when it picked up speed at Borivali’s platform number 6. Atra is then seen losing grip and spins for a good 10 seconds before his already limp body disappears under the train.

An RPF official said, “The stall owner told us that he took the leftover change for Rs 100 after buying the water and that’s when the loco-pilot honked, indicating the train was about to leave.” The fear of missing the train led Atra to haphazardly try and board the train, the official said. “This split-second decision to try to grab the pole of the train while still holding the change in his hand seems to have caused him his life,” he said.

RPF personnel were the first to arrive on the scene. Praveen Jadaun from Borivali post said, “The Government Railway Police (GRP) is now handling the case. The man is seen dying a very gruesome death in the CCTV footage and is a reminder of the fact that one cannot be too cautious while travelling.”

The Borvali GRP is currently trying to trace Atra’s family. A GRP official said, “We are still trying to find the contact number (of his family) but we do know that he was here for business related work at Bhiwandi from the paperwork we recovered from his person and have made a note of the accident.”