Activists on Friday shared a video recording of the construction work being carried out at the site. 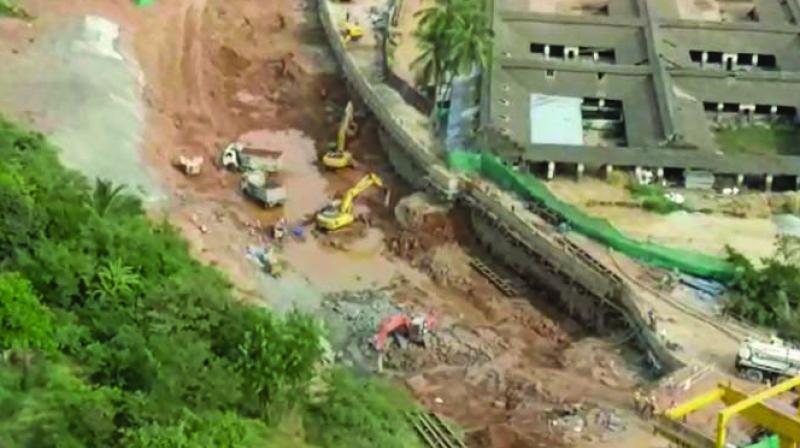 A screengrab of a video showing construction work at the site. (Photo: AA)

Mumbai: The construction of the metro car shed at Aarey Colony has continued despite the state government’s order to stop it, tribals and activists from the Aarey Conservation Group (ACG) have said. Activists on Friday shared a video recording of the construction work being carried out at the site.

Tribals alleged that construction has been continuing unabated in Prajapur Pada inside Aarey Colony. Ashabai Bhoi, a tribal from Prajapur Pada, said that the work carried out by the Mumbai Metro Rail Corporation (MMRC) at the site is making loud thuds through machines. “The work was never stopped here even after the chief minister ordered a complete stop on it. Even during night hours, they keep working and the loud thuds are giving us headaches now,” she said.

Another tribal, Pradnya Chaulkar, said the work is causing vibrations near her home. “One time, some of the items even fell down in our home due to the heavy vibrations,” she said.

Calling the ongoing construction work illegal, Amrita Bhattacharya, a member of ACG, said that it violated the decision taken by the chief minister. Chief minister Uddhav Thackeray had on November 29 announced stay on construction of metro car shed project in the city’s green lung, where protests were held in October against cutting of trees for the work. Speaking to reporters in Mantralaya, Mr Thack-eray had said not a single tree leaf would be cut till further developments.

“At Prajapur Pada, it appears that the MMRC is breaking hard rocks. The site is supposed to have rakes of the metro line. The construction work has been stopped and the government is looking for alternative sites for the metro car shed. As such, any work related to the same should not be continued inside Aarey Colony,” said Ms Bhattacharya.

However, the Mumbai Metro Rail Corporation has refuted the claim that their work is illegal. “Please refer the government letter dated 29.11.2019 stopping the car shed work. The work at metro car shed site at Aarey has been stopped since November 29 in accordance with the order. All works of Mumbai Metro 3 are carried out by following a stringent safety protocol,” said a MMRC spokesperson.