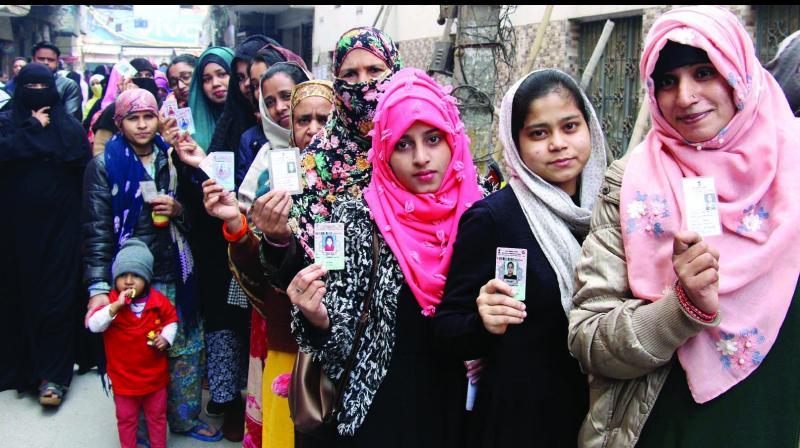 Muslim women wait for their turn to cast vote at a polling booth in Shaheen Bagh on Saturday. (Photo: G.N. Jha)

New Delhi: On a sit-in for nearly two months against the Citizenship Amendment Act (CAA), women protesters at Shaheen Bagh voted in batches on Saturday amid heavy security so that the agitation remains unaffected. While some of the women voted in the morning, others chose to exercise their democratic right in the afternoon and the remaining in the evening. Meanwhile some voters here complained about deletion of their names from the voters list.

“A few voters could not cast their votes in Shaheen Bagh under the Okhla constituency as their names were either found deleted or incorrect in the voters list,” said a poll official.

Shaheen Bagh, which is part of the Okhla constituency in southeast Delhi, has a sizeable Muslim population and was turned into a political battlefield between AAP and BJP.

Nearly every political party was trying to polarise the election by using our name in some way or the other but we here see every thing. We were determined to caste our vote after seeing the political scenario which has hit a new low, said Huzefa a first-time voter.

“We started our day knowing that it will be of double importance for us. There were some elders who were in a dilemma whether to vote or not but we urged them to come out as it is crucial for our democracy hence, every one here is voting,” she said.

The campaign for the Delhi election was deeply polarizing; the BJP sought to portray those protesting against the Citizenship Act in Shaheen Bagh as “traitors” and “anti-national”.

After casting her vote Najma said: “I am voting for India and its Constitution. We are all citizens of India and people should come out and vote. In this election, almost every politician irrespective of their party shifted from the real issues.”

Amzad Qureshi, who returned to the protest site after voting said: “I stayed at home to let other women in the house go out and vote. Now I have joined them here at Shaheen Bagh after voting. I voted today to secure democracy. Our agitation was about “human issue” but  was turned into a poll issue to serve selfish interests”.

Waheeda Khan, another resident of Shaheen Bagh, said they decided to vote in batches. “The women here had decided a day before voting that some of them would go out for voting in the morning, while others will stay back for chores. The others will go in the afternoon and then come back to the protest site.

“By the evening, we will be a full house again, all geared up to continue our protest,” she said.

In the meantime, the menfolk from Shaheen Bagh filled in at the protest site when the women protesters were away completing domestic chores. One of the famed “dadis (grandmothers)” of Shaheen Bagh, rejoining the protest after casting her vote, said: “Delhi is not voting on Hindu-Muslim or Pakistan-India. We are voting on work, education and development.”

Taking a jibe at Uttar Pradesh chief minister Yogi Adityanath’s “biriyani” remark, Mohammad Ayub, a resident, said they were voting to prove a point that they were not being served any “biryani”.

Shaheeda, another ‘Dadi’ said, “The protest did not get affected by voting. We ensured that we exercised both our rights equally well.  “We are being accused of taking ‘biryani’ from politicians. We make scrumptious ‘biryani’ at home. We would rather invite these politicians here to sit and talk to us over a plate of biryani,” she said.

“No party serves us ‘biryani’. The women cook and bring food to feed the protestors,” she added.

AAP’s Amanatullah Khan is the MLA from the area and the party’s candidate. He faces Congress’s Parvez Hashmi and BJP’s Brahm Singh Bidhuri.