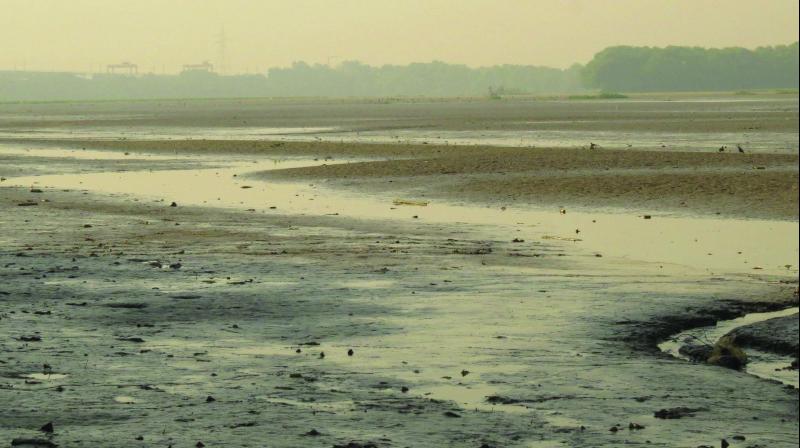 New Delhi: While the season for the arrival of migratory and resident water birds has begun, the wetland at Okhla Bird Sanctuary, which is a haven for thousands of birds, has been dried out completely for repair work.

The work of repairing the sluice gates of Okhla barrage, which was started by the Uttar Pradesh irrigation department, is being undertaken at a time when resident species and large flocks of long distant winter migratory water birds from North Asia, Central Asia, and the Siberian parts, make a stopover at the sanctuary.

The wetland habitat has turned into dry land owing to the replacement of the sluice gates. According to environment activists, the birds are now being forced to divert to some other wetlands. This is resulting in the decrease of water bird diversity and their population in the sanctuary.

“Surprisingly, at this prime time when the arrival of water birds is expected anytime, the Uttar Pradesh irrigation department has started repairing the barrage gates by releasing water from the sanctuary wetland since the last week of September. This is being done without considering the impact on birdlife habitat. How could the chief wildlife warden give permission for this work in October?” said T.K. Roy, ecologist and conservationist.

Mr Roy added that the department has been undertaking repeated repair works since 2012 even when they do not require so. He argued that in contrast, the old Wazirabad barrage at the upstream Yamuna, which was constructed in 1892, does not need repeated repairs.

“The gates have been corroded by pollution from Hindon River and if we don’t repair them now, both the birds and the sanctuary would be affected later. We intend to complete the work by October 31,” he said. On being asked why the work was not undertaken before October, the official said that the department didn’t have the clearance for it.