The 17-year-old boy revealed that he was involved with the Blue Whale challenge and he made scratch marks on his face with his geometry box. 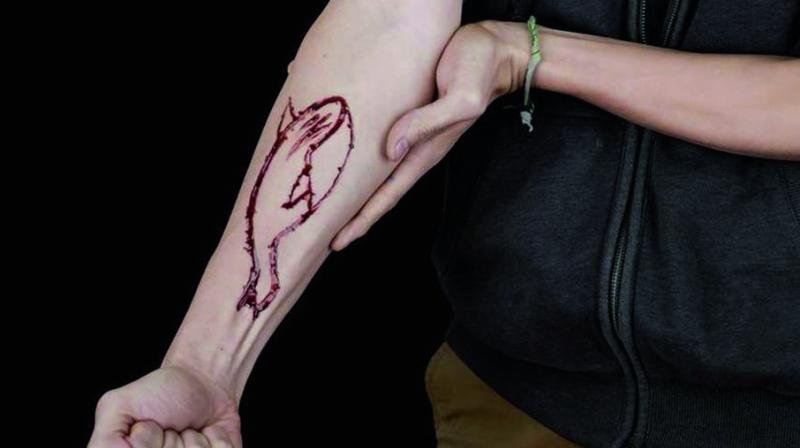 An increasing number of cases of young victims falling prey to the Blue Whale challenge, an Internet game, are being reported from various parts of India and abroad.

New Delhi: With the online killer game Blue Whale spreading its tentacles fast, another Delhi boy was brought to a hospital with scratch marks on his face. During psychological evaluation, the 17-year-old boy revealed to a doctor that he was involved with the Blue Whale challenge and he made scratch marks with his geometry box. The boy’s mother contacted the hospital for an appointment, claiming that she has recently observed that her son had gone completely silent and had scratch marks on his face.

An increasing number of cases of young victims falling prey to the Blue Whale challenge, an Internet game, are being reported from various parts of India and abroad. The most recent was the death of a 20-year-old youth who committed suicide by jumping into Sabarmati river after he reportedly played the Blue Whale game. In the case of the 17-year-old boy, the doctors said that he was an introvert and was suffering from inferiority complex.

“He used to be a loner and occupy himself with online gaming. During consultation, the boy was reluctant to speak, but gradually opened up about playing the game. He accepted that he had completed the first few tasks of the 50 tasks,” said Dr Bhagwat Rajput, neuropsychiatrist at the department of mental health and behavioural sciences in Venkateshwar Hospital, Dwarka.

He added that the boy has been counselled and so have been his parents to give him maximum support. Some medications have been prescribed to balance the adrenaline rush and other aggravated hormones.

“The game is a psychological one, which at first includes easy tasks to condition the player and gradually drives the child to a final suicidal task. Till now I have treated cases wherein players completed up to 6th or 7th challenge, which include self-isolation and avoiding interaction; watching horror or psychedelic movies at odd hours; leaving one’s room or house at odd hours; and small steps towards self-mutilation as the initial tasks,” he said

The doctor said that changes in behaviour and activities are the best way to identify a suspect player. Also, digital supervision is a must.

“Parents should check the browsing history of the computer, which gives an idea what the child is going through. In case parents come across suspecting behavioural changes in their children, a psychiatrist should be consulted immediately,” said Dr Rajput.