Last year, the bird was reported by the Delhi bird watchers at Sultanpur National Park and the Okhla Bird Sanctuary. 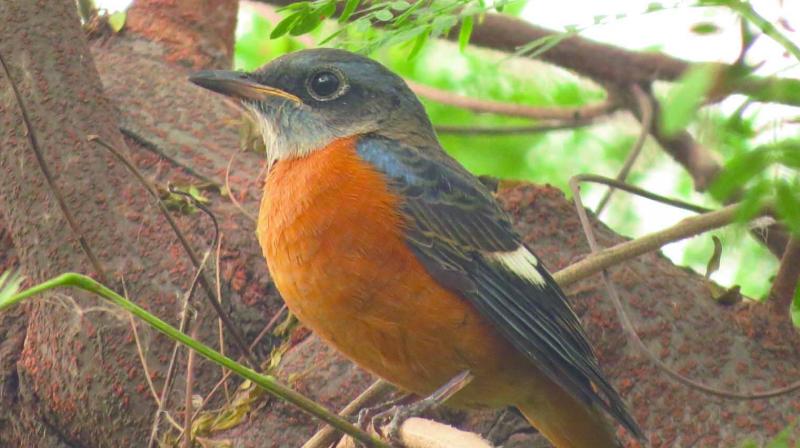 New Delhi: Here is good news for bird watchers and bird enthusiasts. A blue-capped rock thrush, a beautiful summer migratory bird, whose sighting is rare in the plains, has been spotted in Delhi-NCR for the second year in a row.

The rock thrush (Monticola cinclorhynchus) is a terrestrial bird, which breeds in the Himalayan foothills, and in winter migrates to the southern parts of India mainly in the Western Ghats.

Environmentalists said that its sighting at the Okhla Bird Sanctuary this year is interesting as it is rarely seen on the plains including Delhi-NCR.

“It is not a rare bird species, but its sighting is rare on the plains,” said ecologist and conservationist,” T K Roy. The blue capped rock thrush gets its name mostly from the colours of its plumage (feathers).

“The adult male has a blue head, chin, throat, and upper parts are blue and black. The bird’s lower body is chestnut brown in colour and it also has a diagnostic white patch on the wing. The adult female is olive brown with a brown and scaly whitish underside,” said Mr Roy.

Last year, the bird was reported by the Delhi bird watchers at Sultanpur National Park and the Okhla Bird Sanctuary.

The sighting has come at a time when the Okhla Bird Sanctuary wetland has turned into a desert land since the last week of September as the irrigation department has taken up the work of repairing sluice gates of the Okhla barrage.

But still, arrival of more than 12 species of winter migratory water birds in few numbers is being seen in and around the existing few ditches,” he said.

He, however,  added, “But surprisingly every year a few uncommon or rare bird species are sighted in the sanctuary due to degrading condition of ecology and wildlife habitat of the sanctuary by increasing biotic pressure and disturbing human activities.”