Trial run of the ambitious project was conducted in March. 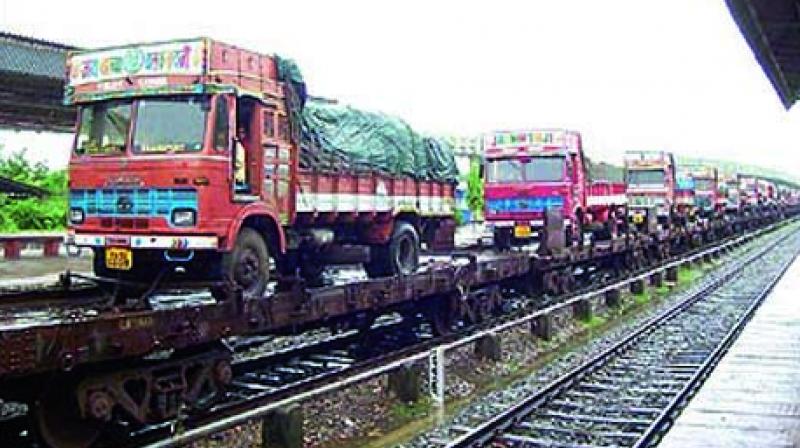 As per railway ministry, the project did not take off due to “infrastructure constraints”.

New Delhi: The ambitious Ro-Ro service, which was started in the capital with an objective to reduce pollution has not taken off even after the trial run in March. According to Indian Railways, this is due to some “infrastructure constraints” hampering the regular running of the Ro-Ro (Roll on-Roll off) service.

Under the ambitious initiative, the railways had planned to board heavy commercial vehicles on to flat wagons at the beginning of city limits and offloaded at the other end of the city. Called the ‘green transportation’ concept, it was touted as a novel solution to Delhi’s pollution and traffic congestion.

In the trial run conducted on March 2 this year, 30 loaded trucks were transported on wagons from Garhi Harsusu station in Gurugram for Muradn-agar in Uttar Pradesh. However, after the inaugural run, the project did not take off due to “infrastructure constraints”.

“It has been observed by Northern Railways that primary overhead equipment (OHE) related constraints hampered the regular running of Ro-Ro service,” said the railways ministry in a reply to a complaint filed on its grievance redressal portal.

It was revealed that there are a large number of locations where height of OHE wire was less than the standard height thereby “infringing the existing rule of maximum permissible height of wagons”, according to a study conducted by Delhi division of the railway.

An estimated 66,000 diesel guzzling trucks enter Delhi daily from 127 entry/exit points to the city. Of these, 15,000 trucks are not destined to Delhi. According to a study conducted by the Centre for Science and Environment, commercial vehicles entering Delhi emit around 30 per cent of the total particulate load and 22 per cent of nitrogen oxide load.

Terming the project as a boon for the capital, Union  minister for railway Suresh Prabhu had during its launch said that it would have a direct impact on its ambient air quality and the capital would breath clean air.

When an environment activist, Vikrant Tongad , raised a question about the status of the Ro-Ro project, the authorities’ replied that a “joint group” was examining the issues related to make the routes suitable for truck movement in the NCR region.