Antarctica should be left to the penguins 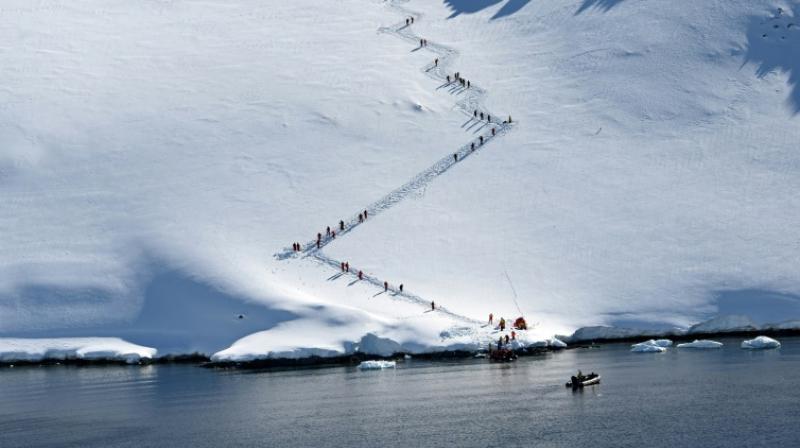 Tourism is the only commercial activity allowed, apart from fishing -- the subject of international disputes over marine sanctuaries. (Photo: AFP)

Washington: The swimsuit-clad tourists leap into the icy water, gasping at the shock and startling a gaggle of penguins. They are spectators at the end of the world, luxury visitors experiencing a vulnerable ecosystem close-up.

And their very presence might accelerate its demise. Antarctica, a vast territory belonging to no one nation, is a continent of extremes: the coldest place on Earth, the windiest, the driest, the most desolate and the most inhospitable. Now, it's also a choice destination for tourists. All around Half Moon Island, off the Antarctic Peninsula, blocks of ice of all sizes float by on a calm sea, their varying forms resembling weightless origami shapes.

On this strip of land that juts out of the Antarctic Polar and towards South America visitors can see wildlife normally only viewed in zoos or nature documentaries along with spectacular icy landscapes. The ethereal shades of white that play across the pillowy peaks change with the light, acquiring pastel hues at dawn and dusk.

"Purity, grandeur, a scale that's out of this world," says Helene Brunet, an awestruck 63-year-old French pensioner, enjoying the scene. "It's unbelievable, totally unbelievable. It's amazing just to be here, like a small speck of dust." AFP joined the 430 passengers on board the Roald Amundsen, the world's first hybrid electric cruise ship, on its maiden voyage in the Southern Ocean.

"It's not your typical beach, but it's awesome to do it," says a numb Even Carlsen, 58, from Norway, emerging from his polar plunge in the three-degree C (37.4 F) water. When tourists go ashore, bundled up in neon-coloured windbreakers and slathered in SPF50 sunscreen, they have to follow strict rules: clean your personal effects so you don't introduce invasive species, keep a respectful distance from wildlife to avoid distressing them don't stray from the marked paths and don't pick up anything.

"We mucked up the rest of the world. We don't want to muck up Antarctica too," says an English tourist, as she vacuums cat hair off her clothes before going ashore. The Antarctic Peninsula is one of the regions on Earth that is warming the fastest, by almost three degrees Celsius in the past 50 years, according to the World Meteorological Organization -- three times faster than the global average.

In March 2015, an Argentinian research station registered a balmy 17.5 degrees Celsius, a record. "Every year you can observe and record the melting of glaciers, the disappearance of sea ice... (and) in areas without ice, the recolonisation of plants and other organisms that were not present in Antarctica before," said Marcelo Leppe, director of the Chilean Antarctic Institute.

Antarctica is "like the heart of the Earth," he added, saying that it expands and contracts like a heart beating, while the mighty current which revolves around the continent is like a circulatory system as it absorbs warm currents from other oceans and redistributes cold water.

The Antarctic Treaty, signed 60 years ago by 12 countries -- it now has 54 signatories -- declared the area a continent dedicated to peace and science, but tourism has gradually increased, with a sharp rise in the past few years.

Tourism is the only commercial activity allowed, apart from fishing -- the subject of international disputes over marine sanctuaries -- and is concentrated mainly around the peninsula, which has a milder climate than the rest of the continent and is easier to access.

Cruise ships have roamed the region for around 50 years, but their numbers only started to increase from 1990, as Soviet ice-breakers found new purposes in the post-Cold War era. Some 78,500 people are expected to visit the region between November and March, according to the International Association of Antarctica Tour Operators (IAATO).

That's a 40-per cent increase from last year, due in part to short visits by a few new cruise ships carrying more than 500 passengers, too many to disembark under IAATO regulations. "Some might say 'Well, 80,000 people, that doesn't even fill a national stadium'... (and that it) is nothing like Galapagos which welcomes 275,000 a year," says IAATO spokeswoman Amanda Lynnes. "But Antarctica is a special place and you need to manage it accordingly."

It is Antarctica's very vulnerability that is attracting more and more visitors. "We want to see this fantastic nature in Antarctica before it's gone," Guido Hofken, a 52-year-old IT sales director travelling with his wife Martina, says. They said they had paid a supplement to climate compensate for their flight from Germany. But some question whether tourists should be going to the region at all.

"The continent probably would be better off being left to penguins and researchers, but the reality is, that is probably never going to happen," said Michael Hall, professor and expert on Polar Regions at the University of Canterbury in New Zealand.

"Vicarious appreciation never seems to be enough for humans. So with that being the case, it needs to be made as low risk to the Antarctic environment and as low carbon as possible," said Hall. "However, when the average tourist trip to Antarctica is over five tonnes of CO2 emissions per passenger (including flights), that is a serious ask."

Soot or black carbon in the exhaust gases of the scientific and cruise ships going to the region is also of concern, said Soenke Diesener, transport policy officer at German conservation NGO Nabu. "These particles will deposit on snow and ice surfaces and accelerate the melting of the ice because the ice gets darker and will absorb the heat from the sun and will melt much faster," he told AFP.

"So the people who go there to observe or preserve the landscape are bringing danger to the area, and leave it less pristine than it was," he added. Antarctic tour operators insist they are promoting responsible tourism. The trend is for more intimate, so-called expedition cruises, in contrast to popular giant cruise liners elsewhere which are criticised for being invasive and polluting.