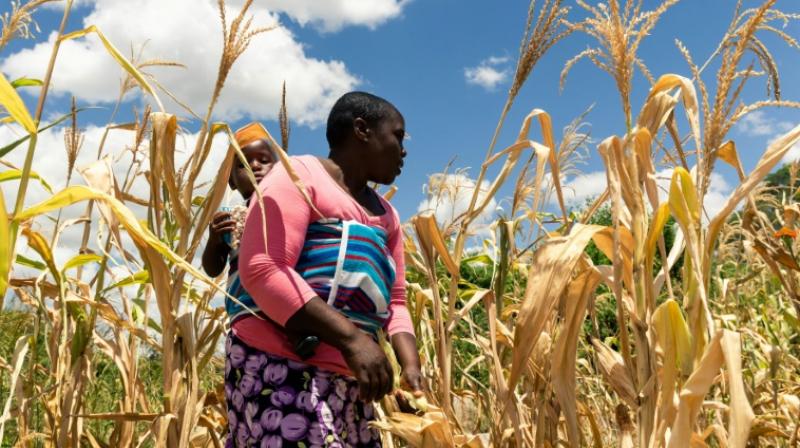 Political polarisation, economic and financial problems and erratic climatic conditions all contribute to the storm of food insecurity currently facing a country once seen as the breadbasket of Africa. (Photo: AFP)

"The people of Zimbabwe are slowly getting to a point of suffering a man-made starvation," she told a news conference in Harare, adding that eight million people would be affected by the end of the year. "Today, Zimbabwe counts amongst the four highest food insecure states," she said after an 11-day tour, adding that poor harvests were compounded by 490 percent hyperinflation.

"A staggering 5.5 million people are currently facing food insecurity" in rural areas due to a drought that has affected harvests, she said. Another 2.2 million people in urban areas also faced food shortages and lacked access to minimum public services, including health and safe water.

"By the end of this year... the food security situation is expected to worsen with an estimated eight million people requiring urgent action to reduce food consumption gaps and save livelihoods," she said, describing the numbers as "shocking". Zimbabwe is in the grips of an entrenched economic crisis, pervasive corruption, poverty and a crumbling health system.

The economy, crippled by decades of mismanagement under former president Robert Mugabe, has failed to rebound under Emmerson Mnangagwa, who took over following a military-led coup two years ago. "Political polarisation, economic and financial problems and erratic climatic conditions all contribute to the storm of food insecurity currently facing a country once seen as the breadbasket of Africa," Elver said.

She warned that food insecurity heightened "the risks of civil unrest and insecurity". "I urgently call on the government and the international community to come together to put an end to this spiralling crisis before it morphs into a full-blown social unrest," she said. She said she personally "witnessed some of the devastating consequences of the acute economic crisis in the streets of Harare, with people waiting for hours on long lines in front of gas stations, banks, and water dispensaries".

Elver said she also was received complaints of partisan distribution of food aid in favour of known ruling Zanu-PF members against opposition supporters. "I call on the government of Zimbabwe to live up to its zero hunger commitment without any discrimination," Elver said. President Mnangagwa meanwhile said the government would reverse plans to scrap subsidies on corn, a staple in a swathe of southern Africa.

"The issue of mealie-meal affects a lot of people and we cannot remove the subsidy," he said, referring to corn gruel which is widely eaten in Zimbabwe. "So I am restoring it so that the price of mealie-meal is also reduced,” said the president. "We have a cheap food policy that we are creating to ensure that basic foods are affordable," he said.