Fourteen-year-old Jia Rai created a world record as the first child with a disability to swim 14 kilometres in open water. 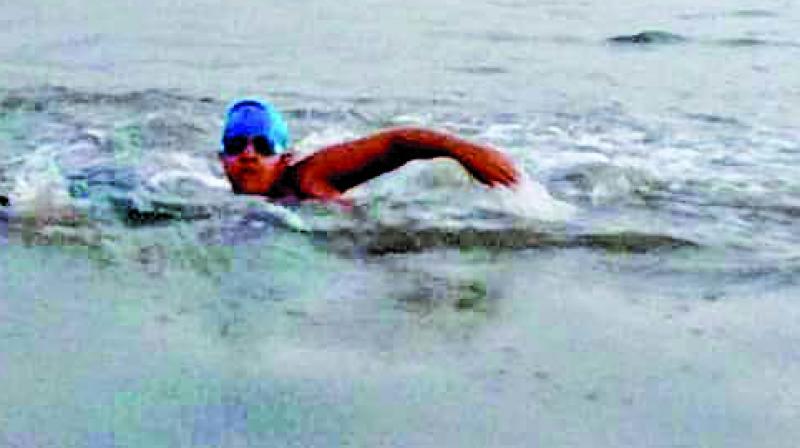 No obstacle is big enough for resolute determination, and Mumbai-based teenager Jia Rai has proven it to be true in spades. The 14-year-old, who has autism, has created a world record by becoming the fastest special girl to swim 14 kilometres in open water. She covered the distance from Elephanta Island to Gateway of India in three hours, 27 minutes and 30 seconds, thus earning her a spot in the India Book of Records, Asian Book of Records, and Limca Book of Records for the youngest and first special girl in the world to achieve this milestone.

The solo swimming event was conducted under the supervision of the Swimming Association of Maharashtra, an authorised body under the Swimming Federation of India.

“Fourteen kilometres is nothing for a normal girl, but for a special girl, there is no one in the world who could achieve this landmark,” says Madan Rai, Jia’s father and Master Chief at Arms II in Indian Navy who attributes her success to those who criticised her for having autism. “If they wouldn’t have criticised her, I believe my wife and I wouldn’t have worked that hard to get our daughter to do what she did today. I am a proud father,” he smiles.

Jia has come a long way since she was diagnosed with Autism Spectrum Disorder and Delay in Speech at the age of two. Her parents got her into swimming based on her doctor’s observation that her repetitive knocking — a characteristic of her diagnosis — could be purposely applied in water sport as therapy. “It was harsh to put her into water at the age of two, but I had to do that for her. Being a naval officer’s child, water is in her genes. Our entire working culture has everything to do with water and I trusted our infrastructure and let her go,” recalls Rai, adding that swimming requires training and discipline, which may be harder to teach to a child with autism.

“You can’t teach them. They have one special skill, but to sharpen that, you need to give a lot of time and attention. And Jia learnt basic swimming shots and her therapy turned into swimming,” he explains. It was much later that Jia’s mother realised that she understands things when she is given a visual presentation. “She left her work and devoted her complete time to Jia, her only aim was to make her a swimmer,” Rai adds.

While Mrs Rai started working on her visual training through Australian Olympic swimmer and diver Michael Murphy’s videos, Mr Rai would research physical training and championships that she could be a part of. But what worked for Jia to win at the battlegrounds was the idea of being ahead of every swimmer. “She doesn’t understand the concept of winning first prize, but she knows that she needs to be ahead of everyone in the pool. She can’t express if she is happy or not, but she understands when we are happy,” the proud papa gushes.

So far, the fifth-grade student of Navy Children School has won several gold medals in swimming. She started in 2017 with 25 meter swimming, and was then put into open water to swim for two kilometres. “It was because even if she flounders in the beginning, she can pick up later,” explains Rai.

Later in 2019, Jia participated in a kids swimming championship at Shree Chhatrapati Shivaji Sports Complex in Pune, where she was declared fastest swimmer among all the participants. After that, she participated in National Sea Swimming Championship in Porbandar Gujarat, where she bagged the gold for the 100-metre swim in spite of her age. “She was not eligible, but the organisers considered her past performances and selected her. She competed among 32 or 33-year-old champions who were preparing for international championships,” Rai reveals.

Jia is currently busy preparing for the Paralympic Games, where she is determined to perform her best. “We have planned a roadmap for her and we are targeting Olympics because India has no medal in swimming so far in Paralympics,” says Rai before signing off.