The ongoing lockdown, though a challenging time for humans, as millions of people are confined to their homes, for wildlife its a boon 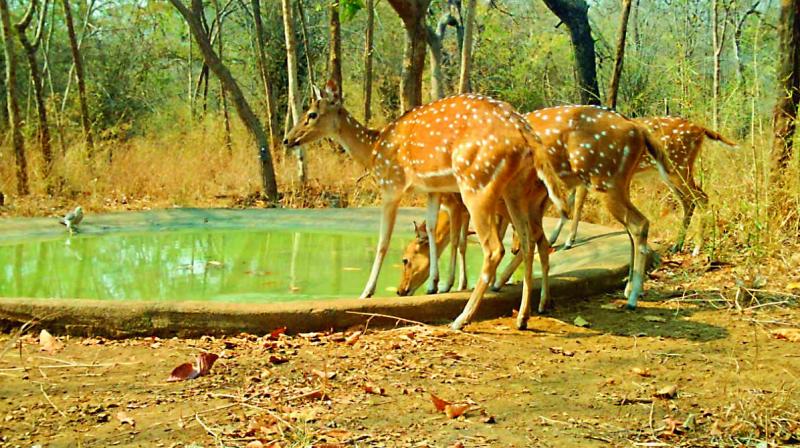 All over the world, wildlife is reclaiming space usurped by man in his ambition and greed.

Reports of animal sightings in and around the forest areas of Nagarkurnool, Nalamalla, Nirmal, and other parts of the State have been on the rise. Tigers, leopards, Nilgaai, bison, civet cats, wild boars and sambar deer have all been spotted.

M. Joji, District Forest Officer, Nagarkurnool, says leopards were spotted thrice in a week on CC cameras. “Normally, leopards, which are endangered, are spotted only about once every quarter, but because of this lockdown, there is no movement of people, everything is quiet, and there’s no air pollution, making the animals more confident about moving freely,” he explains.

Nilgais and bison, which are difficult to spot in normal circumstances, are making frequent appearances on cameras during at the Nirmal Forests.

Nirmal District Forest Officer S.P. Suthan, IFS, feels it is also important that the free movement of these animals is carefully monitored, for their own protection. Work is on in this regard, he says. “Wide and deep saucer pits, a solar-powered borewell and a percolation tank have been set up to quench the thirst of the wild animals”.

Sheik Hussain, Project Scientist, wildlife enthusiast and conservationist, feels that the increase in animal movements is also because it is summer and water and food are scare.

The lockdown has only helped the animals to move with increased freedom, he says. “During the rainy season, food and water are abundant, but in summer this is not so; therefore the animals travel long distances in search of food, and in the process, may even cross the boundaries of their habitats,” explains Shaik Hussain. He blames rampant urbanisation for the situation.

Lessons from the lockdown

Animals are being spotted close to and within human habitations not just in India, but in other counties too.

The argument is that these animals are only reclaiming the space that humans forcibly took away from them, and that the current situation is a significant lesson in human-wildlife conflict.

A retired forest officer, on condition of anonymity, said man’s quest for success has made him encroach into wildlife habitats, leaving no space for animals. He questions why humans are entering into the space of the wildlife when they are not encroaching into our space.

“The animals are not entering our spaces; we have encroached their land. The current lockdown is a lesson for us to realise that these spaces are the animals’ natural habitat and we have to respect them. Let them lead their own lives. If we continue to encroach on them, it will be at our own risk,” he cautions, adding that humans need to be taught how to co-exist with animals.