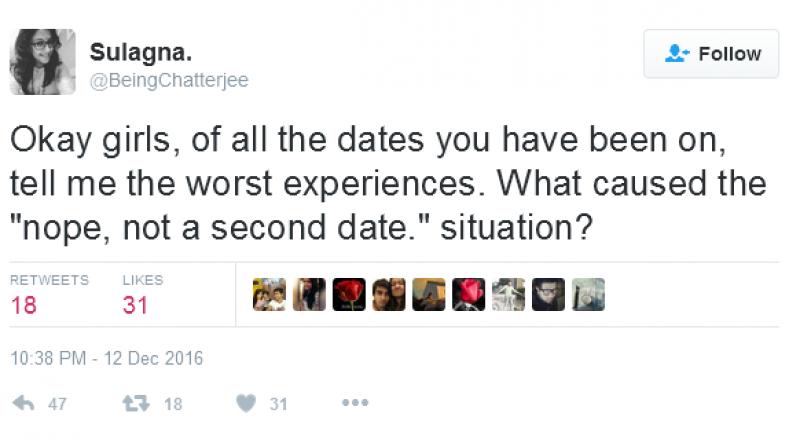 A lot has been happening on Twitter lately, and it isn’t new that one tweet can spark a fire on a variety of topics ranging from politics to social issues and love life too.

Recently, Mumbai-based television publicist and frequent Twitter user started a conversation with all the girls on her timeline about their worst first date experiences; the responses she got are better than what she ever may have expected. The tweet she put out went something like this:

Okay girls, of all the dates you have been on, tell me the worst experiences. What caused the "nope, not a second date." situation?

Here are some of the responses handpicked by us that certainly made us laugh, the others just left us surprised

Told me how his pee pee is larger than his hand smh https://t.co/veCfhHTMV0

@BeingChatterjee Out of nowhere he said his sperms are rare, he belongs to 'Aryans tribe'! Beat that shit? I couldn't even laugh. 😱

@BeingChatterjee Said can't hang around more coz he has 3 more dates "lined up" for the day so if I could wrap dessert up soon maybe?

@BeingChatterjee one told me that if Salman Khan and Akshay Kumar movie comes at the same time, every hindu should watch AK's release.

"I am getting married in Utah next week. Finish dessert by the time I buy a condom? One last shenanigan"

@BeingChatterjee told he asked me out because I cook well. Then told he prefers to date marriage material girls.

Some were filmy, some religious and the rest, lets just not discuss about it. They definitely got 'Your first impression is your last impression' wrong.