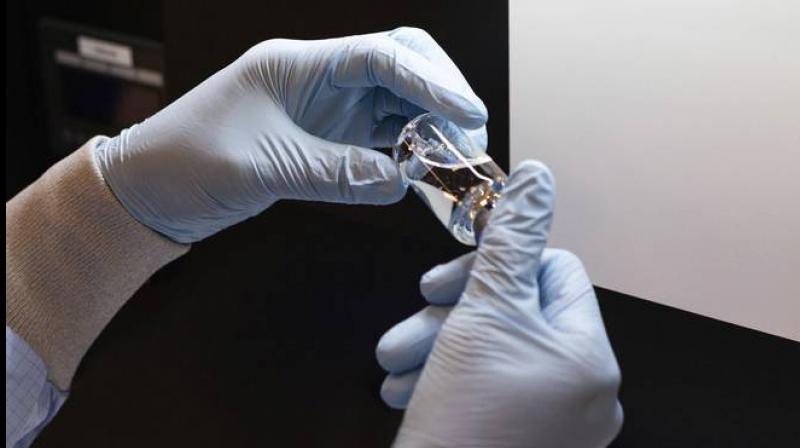 The draft New Drugs and Clinical Trials (Amendment) Rules stipulate manufacture and import of unapproved drugs based on a prescription by a hospital. (AP Photo)

New Delhi: Seeking to facilitate availability of experimental drugs for severely-ill COVID-19 patients, the Union Health Ministry has issued a draft notification for "compassionate use" of any unapproved drug that is in the phase-III clinical trial globally.

According to a gazette notification of the draft rules published on June 5, a hospital or medical institution may import new drug for "compassionate use for treatment of patients suffering from life threatening disease or disease causing serious permanent disability or disease requiring therapy for unmet medical need", which has not been permitted in the country, but under Phase-III clinical trial (human trial) in the country or abroad, by making an application to the Central Drug Regulator.

Also, if any hospital prescribes a new drug for the same purposes then they may be approved to be manufactured in a limited quantity subject to provisions of the rules.

The manufacturer intending to manufacture a new drug will have to obtain the consent in writing from the patient to whom the medicine has been prescribed or his legal heirs and make an application to the Ethics Committee of the hospital or medical institution for obtaining its specific recommendation for manufacture of such new drug.

After obtaining the recommendation of the Ethics Committee, the manufacturer shall make an application to obtain the permission, to the Central Licensing Authority for manufacturing the new drug for the purpose of compassionate use, the draft rules stated.

"The manufacturer to whom the permission is granted shall make use of the new drug only for the purposes specified in the permission and no part of it shall be sold in the market or supplied to any other person, agency, institution or place," it stated.

The new draft rules will be applicable for 15 days during which people can send their objections and suggestions to be considered by the Central Government after which the final amended rules will be published in the gazette of India.

The set of new rules have been inserted under section 96 which deals with filing an application, granting the license to the importer or manufacturer, conditions and suspension of such licenses among others.

For both manufacturing and importing, the licence shall remain valid for a period of one year from the date it has been issued.

If an importer or the manufacturer to whom the license is granted fails to comply with any provision of the Act and these rules, the Central Licensing Authority, may, after giving an opportunity of being heard, suspend or cancel the license for such period as considered appropriate either wholly or in respect of some of the substances to which the violation relates.

The quantity of any new drug manufactured or imported on the basis of permission granted shall not exceed one hundred average dosages per patient, the draft rules stated.

But in exceptional circumstances on the basis of the prescription of the medical officer and the recommendation of the Ethics Committee, the Central Licensing Authority may allow the manufacture of such new drug in larger quantity.

In both cases, for import or indigenous manufacturing, the application should have details including rationale for the use of the new drug as compassionate use over the available therapeutic options, the criteria for patient selection with description of the patient's disease or condition and the method of administration of the drug, dose, and duration of therapy.

It should also mention the description of the manufacturing facility and a description of clinical procedures, laboratory tests, or other monitoring necessary to evaluate the effects of the drug and minimize its risks among others.

Several drugs across the country are in phase III clinical trials phase for COVID-19. Anti-viral drug Remdesivir, last week, was approved for "restricted emergency use" on severe COVID-19 patients.

India's drug regulator granted US pharma giant Gilead Sciences marketing authorisation for the drug for "restricted emergency use" on hospitalised COVID-19  in view of the crisis posed by the pandemic.