Olaf had to be careful about symbols used in these paintings. 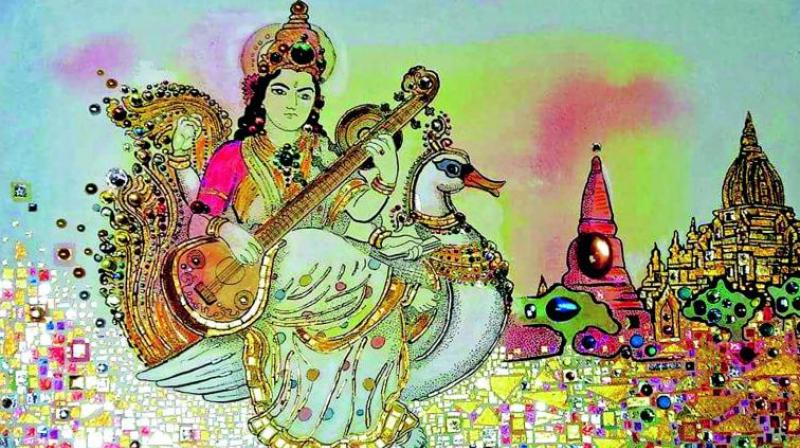 Olaf Van Cleef’s Swarovski-studded paintings of are set to create a revolution in the country.

Paris-based artist Olaf Van Cleef once read a story about gems, placed under protection in a Ganesh temple near Golconda. The Mughals destroyed the temple and fort, and the gems were moved to Delhi. Later, he visited the tomb of the last Mughal Emperor of India and saw a picture of Bahadur Shah Zafar covered in jewels. The crown was made with the Golconda diamonds. This gave Olaf the inspiration to use precious gems in his art. The acclaimed artist, who’s showcasing his work in India, talks about his art and more.

A member of the Van Cleef family, who were the Czar’s jewellers, Olaf took to painting in childhood. “It was a means of relieving boredom during sleepless nights. I would take my brushes — some very fine ones with just a single hair — don three spectacles, one on top of the other, and painted abstract works. Some were colourful and vibrant and often dotted with tiny white points of paint applied with superfine brushes,” he shares.

Though his abstract work had a lot of takers, his paintings with Swarovski crystals gained wider attention. He adds, “I was fascinated by the stones, all my life. So, I decided to give it a try. I began painting Hindu deities based mainly on calendar art and Tanjore paintings. While these were exquisitely detailed, I gave them a humorous twist, that gives a touch of individuality. I added precious and semi-precious stones for a three-dimensional effect,” he adds.

Olaf had to be careful about symbols used in these paintings. “Detailing was very vital to their aesthetic appeal and I was very conscious about the paintings because I didn’t want to hurt sentiments,” Olaf says, adding that his paintings have three dimensions — symbolism, imagination and realism.

He shares that inspiration for art comes from India. “You have the peacock, the elephant, the tiger, and the gods and goddesses decked in fine jewellery. It’s all very amazing and as an artist, it gives me the freedom to explore,” he says.