Gallery that has the finest collection of Mexican folk art

Gallery in central Mexico displays a trove of folk art. 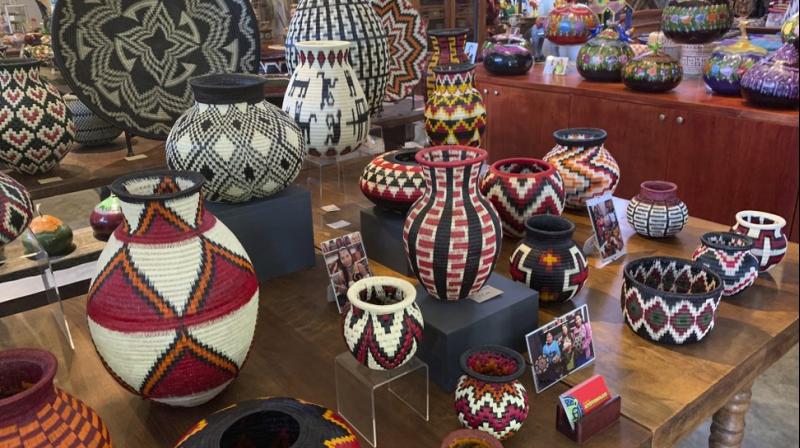 During the pre-Hispanic period, oil from chia seeds was mixed with powdered minerals or plant-based dyes to create protective coatings and decorative designs. (Photo: AP)

Washington: It’s been said that if you’re not an artist when you first visit San Miguel de Allende, you’ll certainly be one by the time you leave. Similarly, if you step into Mayer Shacter’s Galeria Atotonilco as a novice, you’ll walk out an appreciator of fine Mexican folk art.

Shacter, a former ceramics artist from Berkeley, California, who has lived in Mexico since 2003, is much more than a curator. He travels to remote areas of Mexico to meet the artists and learn about their craft, and then he brings their work back to his gallery, where he imparts his knowledge to his customers.

His is now regarded as one of the finest collections of Mexican folk art anywhere. On TripAdvisor, the gallery, which opened in 2006 in a 600-square-foot section of his home and now consumes 6,000 square feet, is currently the top-rated “thing to do” in San Miguel de Allende, which is a short 15-minute drive away.

Shacter’s passion for his gallery is immediately obvious. His collection, which ranges from textiles and woven baskets to antique ironwork and papier maché masks, is broad, and “a reflection of my many interests.”

“I have a personal relationship with these people. I love helping them preserve these cultural traditions,” he said. For example, about 15 years ago, he met some artisans from Nayarit, who make Huichol yarn and bead art, after they rear-ended his car. Shacter said the police threatened to confiscate the family’s pickup truck because it was uninsured.

“We got their information and agreed to pay for our own repairs. They agreed to give us some yarn paintings,” he said, adding that they’ve been doing business ever since. The Huichol are an indigenous people who mostly live in the mountainous areas of northwestern Mexico. They press brightly colored yarn onto boards coated with a thin layer of special beeswax from Campeche and tree resin. The “paintings” began as ceremonial religious art, and often include representations of deer, corn, peyote and other symbols from Huichol mythology.

Shacter says the artists’ quality of life and sustainability are paramount to him. He rarely buys work on consignment. “With one or two exceptions, everything in the gallery, we purchase outright,” he said. “When we leave a person’s house, they have money in hand or money in their bank account.”

Another highlight of his collection is the lacquered gourds from Temalacatzingo, Guerrero. Lacquering is one of Mexico’s oldest crafts. During the pre-Hispanic period, oil from chia seeds was mixed with powdered minerals or plant-based dyes to create protective coatings and decorative designs. The gourds can grow on trees or vines and are dried before using. Those with bottle-like shapes are cut so the top can be used as a lid.

The layers of lacquer must be applied separately, dried and then burnished. Several small pieces can be done in a single day, while a larger decorative piece may take two or three months. Because Shacter has developed relationships with some of the best artists in Mexico, his gallery is packed with treasures.