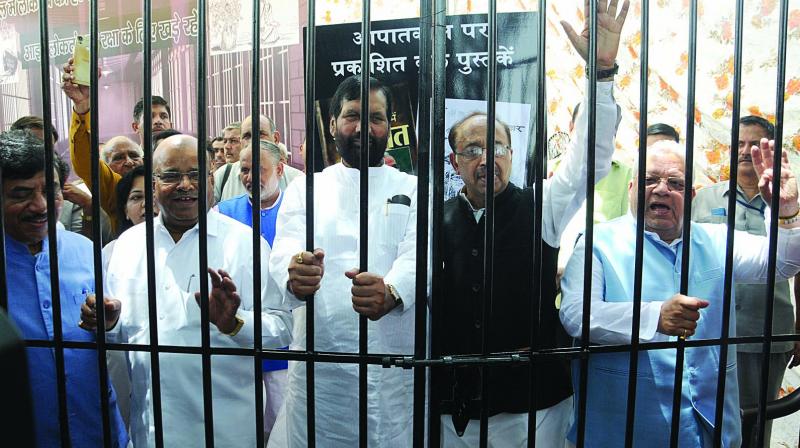 New Delhi: Comparing the then Prime Minister Indira Gandhi with the German dictator Adolf Hitler, the BJP on Monday wondered if the script of 1975 Emergency was inspired by Nazi Germany. In the second of his three parts series of article on the Emergency, Union minister Arun Jaitley said unlike Hitler, Gandhi went a step ahead by endeavouring to transform India into a “dynastic democracy.”

“@arunjaitley writes about the dark days of the Emergency, the trampling of personal liberties, excesses committed and how the Emergency was a direct attack on our Constitutional ideals. Do read his blogs,” Mr Modi said sharing links of the blogs.

BJP president Amit Shah said the Congress had “murdered” democracy for its political interests merely to remain in power as it reduced the Supreme Court to a mute spectator, made Parliament passive and silenced the media.

“It was a black day in Indian democracy,” Mr Shah said. In his Facebook post, the Union minister wondered whether the script of Emergency, which was imposed more than 4 decades ago on June 25, 1975, was inspired by what had happened in Nazi Germany in 1933.

“Both Hitler and Mrs. Gandhi never abrogated the Constitution. They used a republican Constitution to transform democracy into dictatorship,” wrote Mr Jaitley adding that there were a few things which Hitler did not do which Gandhi did. “She prohibited the publication of Parliamentary proceeding in the media... Unlike Hitler, Mrs Gandhi went ahead to transform India into a ‘dynastic demo-cracy’...The press censorship laws imposed in India and in Germany were almost similar. You had effectively a one party system in play,” Mr Jaitley said.

As regards the economic programme, the minister drew a similarity between the agenda of Hitler and Gandhi.

“Hitler continued to maintain that his actions were within the four corners of the Constitution, while Gandhi imposed the Emergency under Article 352, suspended fundamental rights under Article 359 and claimed that disorder was planned by the Opposition.”