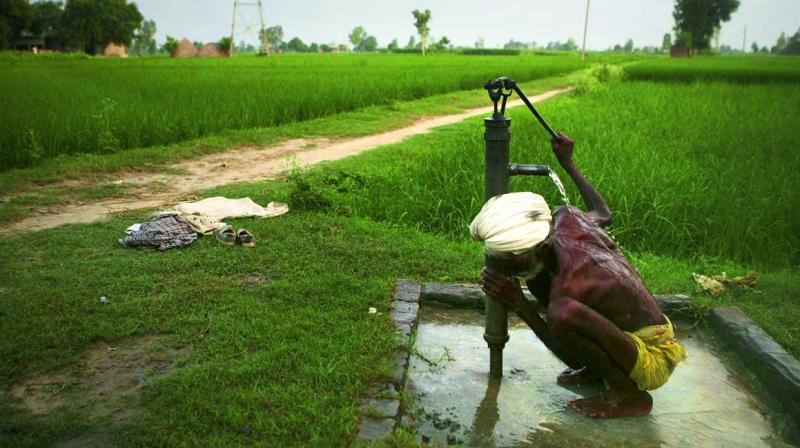 The country has also set the template for reusing wastewater in irrigation.

India’s weather pundits are starting to sweat over this year’s monsoon prospects and the country’s water equation. According to international water safety organisation Water Aid, India has the most rural people living without access to clean water — 63.4 million. The rural poor were highly vulnerable to the effects of extreme weather and climate change, the group said in a report.

India ranks in the top 38 per cent of countries worldwide most vulnerable to climate change and least ready to adapt, according to the Notre Dame Global Adaptation Index. Rural communities dependent on farming to make a living will struggle to grow food and feed livestock amid soaring temperatures, and women — typically responsible for collecting water — may have to walk even greater distances during prolonged dry seasons.

Successive Indian governments have done little to conserve water for off-season use. Even after constructing 4,525 large and small dams, the country has managed to create per capita storage of only 213 cubic metres — compared to 6,103 cubic metre per capita in Russia, 4,733 in Australia, 1,964 in the US, and 1,111 in China.

Farmers in India do a lot of talking about the weather — specially, it seems, when there is no weather in sight. During the month of May, when the land heats up like a furnace and most fields lie fallow, when wells have run dry and the sun taunts from its broiling perch in a cloudless sky, there is no topic more consuming — or less certain — than when and how the summer monsoon will arrive.

India’s water crisis stems from a complex mix of economic, geographic and political factors. While climate change has caused rains to become more erratic, most parts of the country receive a more than adequate amount of rainfall. Water harvesting and management, though required, remains little more than a fad. Many of the areas that are prone to flooding are the same ones that face drought months later. A staggering $52.7 billion has been allocated to so-called major and medium irrigation projects from the First Five-Year Plan (1951-56) to the 11th (2007-12), but irrigation has reached only 45 per cent of India’s net sown area.

Today, India’s agricultural sector accounts for more than 90 per cent of total water drawn, but contributes only 15 per cent to the country’s GDP.

Second, it has been observed that even though minimum support prices are currently announced for 23 crops, the most effective price support is for sugarcane, wheat and rice. This creates highly skewed incentive structures in favour of these water intensive crops.

As traditional mixes of crops have been replaced with high-yielding wheat, rice, sugarcane and cotton, the consumption of water has gone up. In addition, new artificially modified seeds may be giving higher crop yields, but they are also thirstier than natural seeds.

Scientists and activists have consistently warned that relentless groundwater extraction will lead to a steep drop in water tables across the country. Some farmers in these parched states now need to drill down 100 metres or more for water, compared to the 1.5 metres that was the norm in the 1960s, according to research by a local government scientist.

India will need to rein in the systemic corruption that has dogged irrigation projects across the country. In some states these projects have sparked social unrest and political turmoil as seen in Maharashtra and Karnataka, where tenders were awarded at grossly inflated prices.

The proliferation of power plants is another area that requires serious re-examination. Government policies that make water and land cheap in the area seem to be the reason for the location of thermal plants.

Without government intervention to reset the revenue balance in favour of less water-intensive crops, experts warn the sustained production of thirsty crops will further deplete scarce water resources. The government has asked farmers to shift to less water-consuming crops, but it does little to support such a change. Erratic prices for vegetables, oil seeds and pulses limit the incentives for farmers to plant them.

India must rein the huge corruption in irrigation projects in Karnataka and Maharashtra. In these states they are sparking social unrest and political turmoil. The best hope comes from the judiciary which has cracked  the whip on these scams. It has also disallowed drinks majors PepsiCo and Coca Cola from drawing water from Thamirabarani river for their bottling plants in view of the acute water shortage. The burgeoning of power plants is another point that requires a serious relook.

Israel has been a role model for the world in matters of water management and India is now actively seeking the country’s help. Israel’s successes were in large part due to the major innovation of drip irrigation. The country has also set the template for reusing wastewater in irrigation. It treats 80 per cent of its domestic wastewater, which is recycled and constitutes nearly 50 per cent of the total water used for agriculture.

Realising its dire predicament decades ago, Israel studied the “water equation” and made itself all but independent from mother nature. Israel took 70 years to solve its water problem; India won’t need that long, as it can emulate Israeli advances. But New Delhi must summon the political will to act before the water runs out. Changing governance, raising money and installing technologies all take time and the climatic stresses are mounting fast.

Moin Qazi is a well-known banker, author and Islamic researcher. He can be reached at moinqazi123@gmail.com