The bill might run into trouble in the House of Elders where the Congress and the BJP stare eyeball to eyeball with 57 members each. 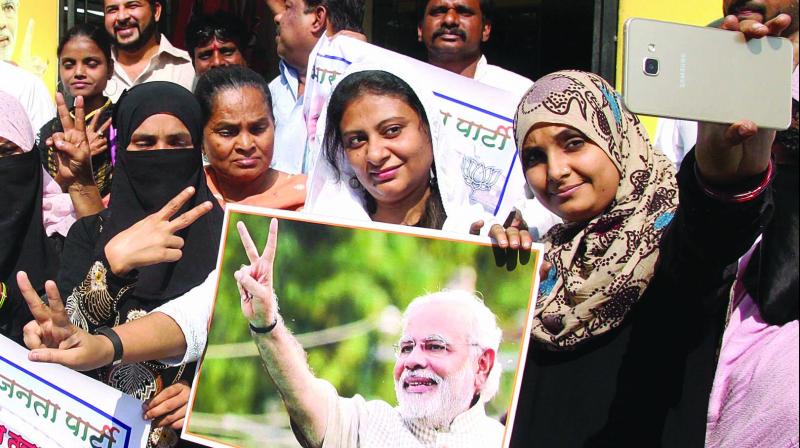 Women celebrate in Mumbai on Friday after the triple talaq bill was approved in the Lok Sabha. (Photo: PTI)

New Delhi: The triple talaq bill which saw a relatively smooth passage in the Lok Sabha will face the Rajya Sabha hurdle on January 2 when Parliament reconvenes after the long New Year weekend. The bill might run into trouble in the House of Elders where the Congress and the BJP stare eyeball to eyeball with 57 members each. Many other parties like the AIADMK, Biju Janata Dal and SP, which had opposed the bill largely over the criminalisation clause, also have substantial strengths with 13, 18 and 8 members each.

Sources told this newspaper that the Congress, which is the chief Opposition in the Rajya Sabha, is likely to make a “token” demand for sending the bill to a select committee. It might be recalled that the party has already supported the bill, but had raised certain issues during the debate in the Lok Sabha. It had also asked that the bill be sent to a parliamentary standing committee.

When contacted, Congress chief spokesperson Randeep Singh Surjewala said, “We have already made our stand clear in the matter. On demands for sending it to a Rajya Sabha select committee, a decision is yet to be taken as it is a parliamentary strategy.”

Sources, however, said that it was most likely the bill is sent to a select committee. However, a section of leaders feel that even if the party demands for it to be sent to the select committee, it might be just for posturing as the leaders who are collecting signatures for the same, including MP Husain Dalwai, include no big names like the Leader of the Opposition as of now.

Chief of Mahila Congress or the party’s women’s wing Sushmita Deb, who put up a spirited argument in the Lok Sabha on the legal loopholes in the bill, said that by not sending the bill to a standing committee in the Lok Sabha, the government lost a huge opportunity to remedy the “lacunae” in the proposed legislation.