From Abhiyan to Nritya Sarita and Ganga Jamuna, Indian tunes were the flavour of the Beating Retreat ceremony. 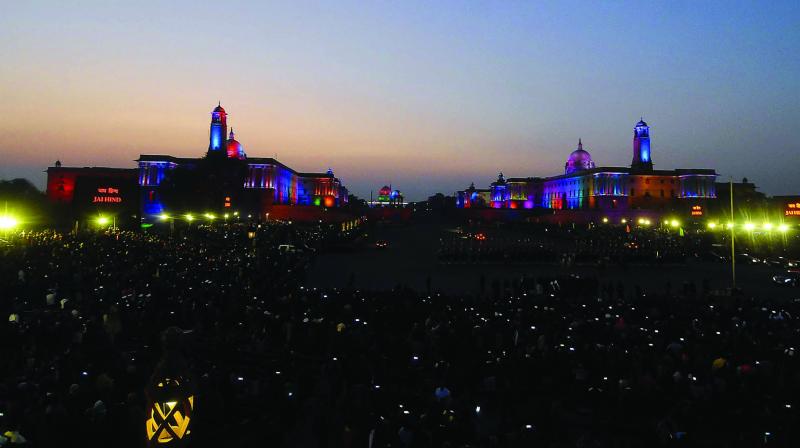 A view of illuminated Rashtrapati Bhavan, South Block and North Block during the Beating the Retreat ceremony in New Delhi on Wednesday. (Photo: PritamBandyopadhyay)

New Delhi: Beating Retreat ceremony at the Rajpath on Wednesday kept the tradition of Abide with Me as the final tune. However, national song Vande Mataram was not played during the ceremony despite being on the list which was shared with the media last week.

Earlier there were reports that hymn Abide With Me will be replaced with Vande Mataram, as the last tune during the ceremony, in an attempt to “Indianise” the ceremony.

The 45 minutes Beating Retreat ceremony is conducted every year on January 29 at the Vijay Chowk, which marks the formal conclusion of Republic Day festivities. Lowering of flags at dusk against the backdrop of the setting sun is followed by lighting up of the Rashtrapati Bhavan, North Block, South Block and Parliament House in unison.

From Abhiyan to Nritya Sarita and Ganga Jamuna, Indian tunes were the flavour of the Beating Retreat ceremony.

The function began with President Ram Nath Kovind arriving at the venue in his ceremonial motorcade.

Abide with Me, which was written by Scottish poet Henry Francis Lyte and composed by William Henry Monk, is being part of the Beating Retreat ceremony after the Mysore palace band was invited to perform in the Republic Day celebrations of 1950. The hymn was also favourite of Mahatma Gandhi

There were 25 tunes composed by Indian musicians, including “Madhumari”, “Marhapeka”, “Jauna Solti” and “Vijay Bharat”.

Singh Bhadauria and Navy Chief Admiral Karamvir Singh were present on the occasion.

“Beating Retreat” is a centuries old military tradition dating from the days when troops disengaged from battle at sunset.

As soon as the buglers sounded the “Retreat” the troops ceased fighting, sheathed their arms and withdrew from the battlefield. It if for this reason that the custom of standing still during the soundings of “Retreat” has been retained to this day.

Tags: beating retreat, abide with me