Mamata trying to create rift between Hindus and Muslims: BJP

WB CM earlier issued an order against Durga idol immersion on Dashami during the procession of Muharram which will be observed on Oct 1. 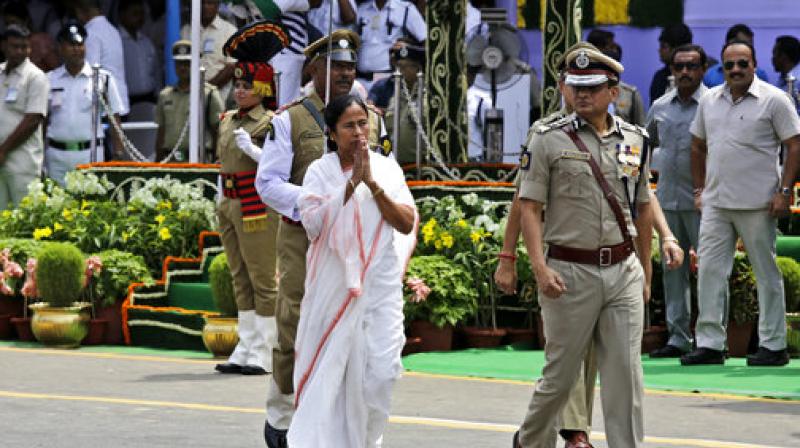 Hours after issuing the order, Mamata Banerjee, however, clarified that immersion of Durga idols on Dashami will be halted only for 24 hours. (Photo: AP)

Kolkata/New Delhi: The Bharatiya Janata Party (BJP) on Thursday slammed West Bengal Chief Minister Mamata Banerjee for halting immersion of Durga idols on Dashami and said she is trying to divide Hindu and Muslims by issuing such directives.

The Chief Minister of West Bengal on Wednesday issued an order against the immersion of Durga idols on Dashami during the procession of Muharram which will be observed on October 1.

BJP leader Rahul Sinha said that the party would approach the Calcutta High Court against the order.

"Last year also she issued such directives on the immersion of Durga idol but the High Court stayed the order terming it wrong. This time also she is repeating the same. She wants to divide Hindus and Muslims.We will not accept this. We will protest against it and also knock the doors of court," Sinha said.

"She does not care about law of land or faith of communities. She only cares about politics of appeasement and vote bank politics. In the year 2016 also, she had come up with similar circular limiting the immersion of Durga idol. She was castigated by the Calcutta High Court. The High Court had categorically stated that this is nothing but appeasement politics. Yet again she is indulging herself into appeasement politics. People of West Bengal will give an apt and befitting reply to her," he said.

Hours after issuing the order, Banerjee, however, clarified that immersion of Durga idols on Dashami will be halted only for 24 hours.

"This year Durga Puja and Muharram fall on same day. Except 24 hour period on Muharram day, immersions can take place on October 2, 3 and 4," she tweeted.

This year Durga Puja & Muharram fall on the same day. Except for a 24 hour period on the day of Muharram... 1/2

Earlier, she had said that there will be no immersion of Durga idols on Dashami after 6 pm.

"No idol immersion after 6 pm on Dashami (September 30) till October 1 due to Muharram processions, immersion will resume from October 2," Banerjee had said in an official statement.

The Chief Minister had also issued a similar order in 2016, however, it was stayed by the Calcutta High Court.