New Delhi: In a landmark judgment to protect the rights of Muslim women, the Supreme Court on Tuesday banned “triple talaq” or “talaq-e-biddat” (instantaneous divorce by uttering “talaq” thrice in one go), a form of divorce followed by Sunni Muslims for centuries.

While the majority on the bench struck down “triple talaq” as unconstitutional, the minority stayed the practice of “triple talaq” for six months or till such time Parliament enacts a legislation to regulate marriage and divorce among Muslims.

Justice Nariman, as part of the majority verdict, said that the Muslim Personal Law (Shariat) Application Act, 1937, is a legislation regulating triple talaq and, hence, can be tested on the anvil of Article 14 (right to equality). Chief Justice Khehar, as part of the minority decision, disagreed with this view.

Justice Joseph, who wrote one of the two majority verdicts, said, “What is held to be bad in the Holy Quran cannot be good in Shariat and, in that sense, what is bad in theology is bad in law as well.”

“Merely because a practice has continued for long, that by itself cannot make it valid if it has been expressly declared to be impermissible,” he said.

By implication, even the minority verdict virtually puts on hold the practice of “triple talaq”.

Legal experts said that the Centre is not under any obligation to enact a law to divorce among Muslims, as the bench’s majority judgment striking down “triple talaq” prevails over the minority decision.

In a batch of petitions, Muslim women, including 37-year-old Shayara Bano from Uttarakhand, suffering due to instant “talaq” had challenged the validity of “triple talaq” on the ground that it violated their fundamental right to equality.

The government virtually ruled out the need for a new law on instant triple talaq, which has been rendered as unconstitutional by the Supreme Court, indicating that existing laws, including the one dealing with domestic violence, were sufficient.

The Union home ministry is now preparing to send an advisory to all states asking them to ensure compliance of the Supreme Court order declaring “triple talaq” void.

While the majority judgment of the apex court bench was written by Justice Nariman, for himself and Justice Lalit, Justice Joseph wrote a concurring judgment with Justice Nariman setting aside the practice of “triple talaq”. 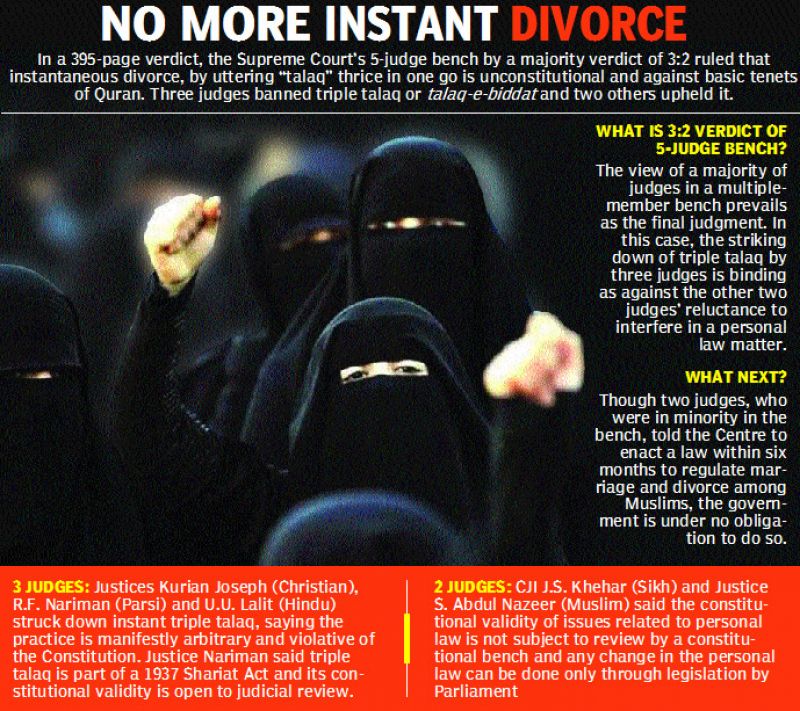 CJI Khehar wrote a judgment for himself and Justice Nazeer to uphold “triple talaq”.

The CJI wrote that the practice of “triple talaq” has to be considered integral to the religious denomination in question and is part of Muslim personal law that cannot be tinkered with by the court. Any change in personal law can be done only through legislation by Parliament, said CJI Khehar.

In a packed courtroom, CJI Khehar, being the senior most, read out his judgment first. He was followed by Justice Joseph and Justice Nariman.

Justice Nariman said, “Divorce breaks the marital tie which is fundamental to family life in Islam. Not only does it disrupt the marital tie between man and woman, but it has severe psychological and other repercussions on the children from such marriage. Given that ‘triple talaq’ is instant and irrevocable, it is obvious that any attempt at reconciliation between the husband and wife by two arbiters from their families, which is essential to save the marital tie, cannot ever take place.”

“...This form of talaq is manifestly arbitrary in the sense that the marital tie can be broken capriciously and whimsically by a Muslim man without any attempt at reconciliation so as to save it,” Justice Nariman said.

“This form of talaq must, therefore, be held to be violative of the fundamental right contained under Article 14 of the Constitution,” said Justice Nariman, adding that the 1937 Shariat Act must be struck down.

Justice Nariman said “triple talaq” does not fall within the sanction of Holy Quran. Even assuming that it forms part of the Quran, Hadis or Ijmaa, it is not something “commanded”.

“Equally, ‘talaq’ itself is not a recommended action and, therefore, ‘triple talaq’ will not fall within the category of sanction ordained by the Quran. Though permissible in Hanafi jurisprudence, yet, that very jurisprudence castigates ‘triple talaq’ as being sinful,” the court said.

In 1985, the apex court in the Shah Bano judgment came to the rescue of Muslim women to grant alimony under Section 125 CrPC though it was argued that CrPC would not apply to Muslims, who are governed by their personal law.

At that time, the Rajiv Gandhi government nullified this judgment through a legislation.

After 32 years, the top court has again interfered with the Muslim personal law in tune with the international convention on human rights to confer equal rights on Muslim women.