The two leaders reportedly undertook a comprehensive review of bilateral ties and exchanged views on regional and multilateral issues. 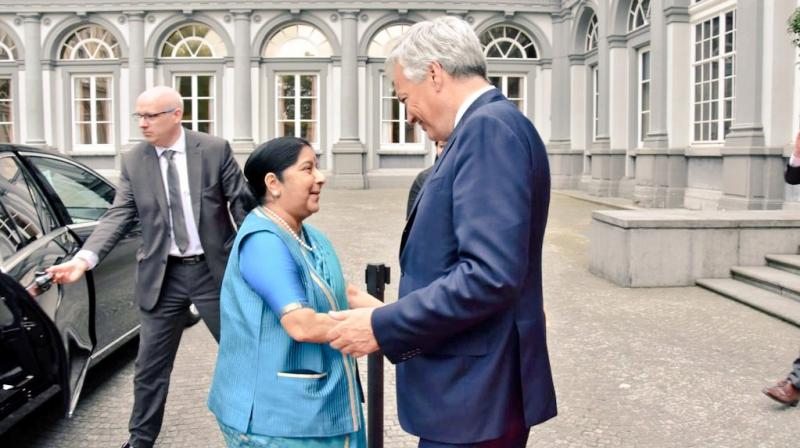 Swaraj arrived in Belgium on Wednesday from Luxembourg on the last leg of her four-nation tour. Earlier, she had visited France and Italy.

"Celebrating 70 years of our excellent bilateral relations! EAM Sushma Swaraj warmly welcomed by the Deputy Prime Minister and Foreign Minister of Belgium Didier Reynders on her arrival at Egmont Palace," Ministry of External Affairs Spokesperson Raveesh Kumar said in a tweet after the meeting on Friday.

Celebrating 70 years of our excellent bilateral relations! EAM @SushmaSwaraj warmly welcomed by the Deputy Prime Minister and Foreign Minister of Belgium Didier Reynders @dreynders on her arrival at #EgmontPalace @BelgiumMFA ahead of the bilateral talks. pic.twitter.com/AAwNJeco28

"Delegation-level talks led by EAM Sushma Swaraj and Didier Reynders. Both leaders undertook a comprehensive review of our bilateral relationship and exchanged views on regional and multilateral issues," he said in another tweet.

"EAM Sushma Swaraj met with the EU High Representative Federica Mogherini. Excellent discussions on maximising full potential of India-EU strategic partnership, including implementation of the decisions taken at the previous India-EU Summit in 2017," Kumar said in a tweet.

EU High Representative for Foreign Affairs and Security Policy Mogherini informed Swaraj on the preparation of a new Joint Communication on India, which will provide direction for increased cooperation in the coming years, as well as the EU's upcoming strategy to enhance, in a sustainable manner, EU-Asia connectivity. They exchanged views on creating the conditions to increase trade and investment flows.

Mogherini also expressed the EU's readiness to deepen the dialogue on data protection and referred to the new EU data protection regime, a statement from the Minister of External Affairs said.

Swaraj and Mogherini also discussed in depth foreign policy and security cooperation, namely on counterterrorism, cybercrime, maritime security, as well as in the Indian Ocean, it said. They also addressed developments in their neighbourhoods, like the situation of the Rohingya, Afghanistan, the Maldives, the importance of preserving the JCPOA with Iran, as well as the ongoing diplomatic work for the denuclearisation of the Korean Peninsula, the statement said.

The 28-nation bloc is India's largest regional trading partner with bilateral trade in goods standing at USD 88 billion in 2016. India received around USD 83 billions of foreign direct investment from Europe between 2000 and 2017, constituting approximately 24 per cent of the total FDI inflows into the country during the period.