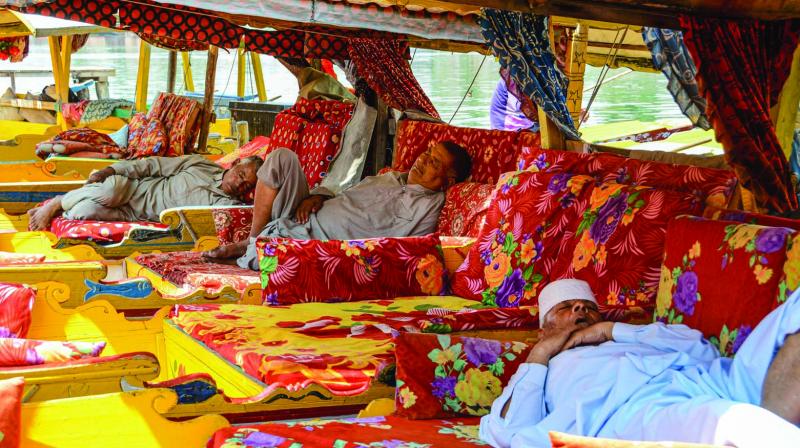 Shikara owners sleep in their parked shikaras at an empty Dal Lake in Srinagar on Saturday. (Photo: PTI)

SRINAGAR: Following the Centre’s stripping Jammu and Kashmir of its special status and splitting the state into two Union Territories (UTs) in the first week of August, the political parties — both mainstream and separatist — have virtually left the people of the Valley in the lurch, leading to a chaotic situation on ground.

48 days on and counting, the Valley remains as the stalemate persists. Although some so-called mainstream political parties, mainly National Conference (NC), have been issuing statements to criticise the Centre’s move and in reaction to related developments including slapping of stringent Public Safety Act (PSA) on former chief minister Farooq Abdullah and incarceration of other leaders, they have failed to guide people on how to rail against the abrogation of Article 370 and bifurcating J&K into two UTs or otherwise.

On the other hand, the separatist parties and their leaders are maintaining complete silence on the whole issue and related developments. In the past, Syed Ali Shah Geelani and Mirwaiz Umar Farooq would almost on daily basis make statements on various issues including “sanctity” of Articles 370 and 35A of the Constitution even when under house arrest.

This time, they are conspicuous by their remaining quiet on the vital issue. The only statement issued on behalf of Mr Mirwaiz during the past one and half months was to deny media reports that he had signed a bond to secure his release after being detained by the police on August 5, the day when Parliament approved the resolution abrogating special status to J&K.

According to these reports, six other political leaders and activists belonging to People’s Democratic Party (PDP) and People’s Conference (PC) also signed similar bonds to swear they will not indulge in any political activity over the issue to ensure their release from custody.

However, the Mirwaiz’s aide Syed-ur-Rehman Shams on Saturday, while quoting the politician- cleric, said that the Hurriyat Conference faction headed by him “stands firm by its principled stand on the issue of Jammu and Kashmir and stands by the people in this unprecedented situation that all are facing”.  He claimed that “all the means and avenues to communicate with the people have been snatched” from the Mirwaiz.”

Nevertheless, the separatist leaders’ maintaining silence has flabbergasted their many supporters and even common Kashmiri.  It is an open secret that it were the separatist leaders whose writ would run in the Valley, the reality that was witnessed during the unrests of 2008, 2009, 2010 and 2016.

In absence of any guidance from the mainstream as well as separatist parties, the people of the Valley find themselves in a helpless situation. Traders and transporters of the Valley are observing a spontaneous strike for past 48 days and all efforts by the administration to persuade them to return to work have failed to bear any fruit. Since the leaders of various traders’ bodies too have been arrested or detained by the police — some of them even shifted to prisons outside J&K — there is no one either from their own tribe around “who could guide us in this crucial time,” said a trader Altaf Ahmed Wani.

However, the government has succeeded in “encouraging” pavement dwellers in select Srinagar areas to resume their businesses. Also, shops are opened in J&K’s summer capital and some other parts of the Valley for three to four hours from 6 am “to enable people to buy eatables and other essential commodities”.