Those with higher ranks will be able to choose colleges of their choice. 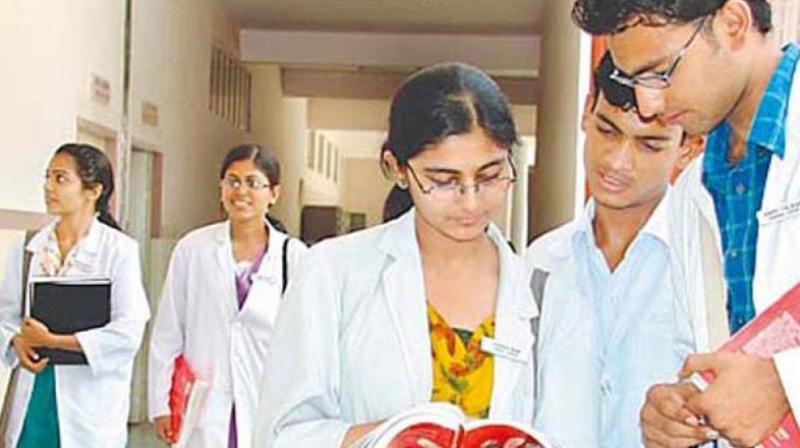 The suggestion of electronic common counselling was included in the bill to prevent the practice of individual counselling which is conducted by medical colleges. (Representational Image)

New Delhi: In a significant step towards reforming the admission process in medical colleges across the country and replacing the controversial Medical Council of India (MCI) with a new body, the Prime Minister’s Office (PMO) in tandem with Niti Aayog and health ministry has inserted clauses like electronic common counselling for all medical colleges to ensure parity and transparency, as well as fixing a 60:40 paid seats to free seats ratio (respectively) in private medical institutions in the National Medical Commission (NCM) Bill 2016.

The government intends to introduce the bill in the forthcoming Budget Session, sources privy to the development told this newspaper. The suggestion of electronic common counselling was included in the bill to prevent the practice of individual counselling which is conducted by medical colleges. Once electronic common counselling comes into effect, it will provide greater options to meritorious students seeking admission in medical colleges. Those with higher ranks will be able to choose colleges of their choice.

Currently, the percentage of free seats varies from state to state. While Punjab doesn’t offer free seats at all, private medical colleges offer 75 per cent seats in Gujarat. Orissa offers 50 per cent free seats per college. Having a fixed ratio would mean that students from economically weaker sections will be able to get admission in private colleges.

The legislation was ready in August last year and both Niti Aayog and the health ministry were keen to bring it during the Monsoon Session. However, Prime Minister Narendra Modi directed them to seek stakeholders’ opinions on the bill before introducing it in Parliament.

Mr Modi, as was reported first by this newspaper on October 2, 2016, had sought more clarity on the provisions of the bill from the states and concerned stakeholders before giving it a final shape. The aforementioned provisions which have been inculcated in the bill have been selected by the PMO and Niti Aayog from among 15,700 suggestions received from the states.

Apart from these, the legislation has also included a provision under which doctors in the selection committee which it has suggested should be formed to appoint regulators. In the earlier draft of the bill, there were no doctors in the panel for selecting regulators.