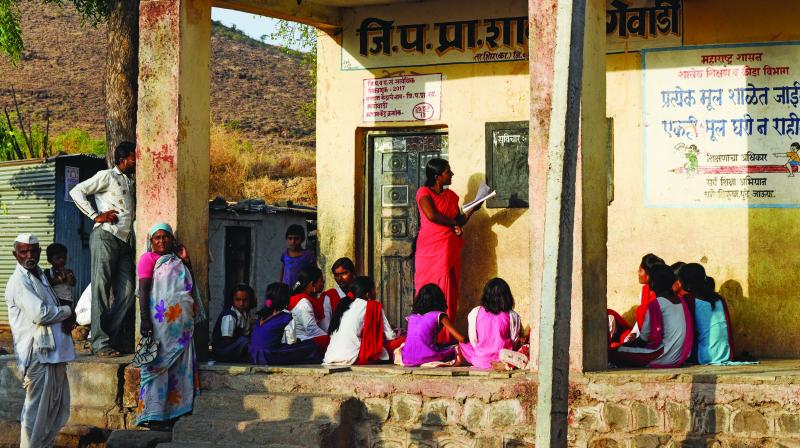 While more girls are now accessing secondary education, boys are dropping out.

The most empowering moment for a woman is when she knows she can control her fertility and does not have to be trapped in unwanted pregnancies. After that realisation, the question is what are the choices before her? Can she access these contraceptives easily?” It was the 1994 International Conference on Population and Development (ICPD), Cairo that emphasised putting people first and upholding their sexual and reproductive choices. One hundred and seventy nine governments called for comprehensive healthcare, including voluntary family planning, safe pregnancies and childbirth.

“The State of World Population 2019”, released recently, looks at the unfinished business of rights and choices for all, 25 years after the historic Cairo conference. Much has been achieved since 1969 when the United Nations Population Fund (UNFPA) became the UN agency to look after population growth and reproductive health needs, says the report. In India, the average number of births per woman was 5.2 in 1971, which currently stands at 2.3. Contraceptive use has increased from just 9 per cent in 1969 to 54 per cent in 2019.

Yet, several challenges remain. In India, annually, 35,000 women continue to die during childbirth due to preventable causes. There are still an estimated 47 million women who want to prevent a pregnancy but are not using a modern method of contraception, highlighting the need to improve access to family planning and comprehensive sexual and reproductive health services.

Despite the increasing availability of contraceptives over the years, hundreds of millions of women across the world still have no access to them, and to the reproductive choices that come with them, points out UNFPA executive director Dr Natalia Kanem: “Without access, they lack the power to make decisions about their own bodies, including whether or when to become pregnant.”

Calling on world leaders to re-commit to the promises made in Cairo to ensure sexual and reproductive health and rights for all, Dr Kanem said the world will have a historic opportunity to complete the unfinished business of the ICPD at the Nairobi Summit on ICPD25 this November. Governments, activists and stakeholders will get an opportunity to protect the gains made so far, fulfil the promise of the ICPD agenda and ensure no one is left behind.

So what is the unfinished agenda that needs to be taken up at Nairobi? Discussing this in Delhi were A.R. Nanda, a former health secretary who formulated the National Population Policy, Dr Gita Sen, professor and director, Ramalingaswami Centre on Equity and Social Determinants of Health who has been profiled in the 2019 World Population Report as one of the champions of change, and Dr Vimala Ramachandran, managing director, ERU Consultants Pvt Ltd, who had worked to remove the discord between government and civil society and bring them on a common platform at Cairo. Ena Singh of the UNFPA moderated and steered the discussions for the first look on the Unfinished Agenda.

Mr Nanda, who could probably be called the feminist bureaucrat because of his empathy with women’s issues, has only daughters and not having a son did not faze him. A widower, he has broken tradition and lives with his daughters. The daughter who is the principal of Miranda House, however, often tells him that despite all his support and work in promoting gender issues, mindsets still need to change. And that, Mr Nanda pointed out, was the unfinished task — changing public mindsets on sexual reproductive health and women’s rights.

“Control”, he pointed out, was the norm in government. Targets were set for achieving “population control”. The Cairo conference had removed targets but under the euphemism “expected levels of achievement” for population stabilisation, targets were back in India, Mr Nanda said.

Gita Sen recalled two gentlemen walking down the Cairo conference corridors muttering “too much sex in this conference”. Several population conferences, held earlier too sidestepped sex. Yet sex was the basis of population growth and cannot be dealt with without talking about sex. Has that mindset changed? There was an almost toxic impact of inequality on women’s health in India, she pointed out. Though Indian society is great, inequality was in our bones. Authoritarian mindsets still have to change, she flagged.

Ena Singh pointed out that the flavour of inequality was different in the 1990s and we tolerated it. Rights were missing. At Cairo, rights and inequality were looked at for the first time.

Recalling the 1980s and the 1990s, when family planning was target-driven, Vimla Ramachandran pointed out that not just the health sector but those in education and rural development were given family planning targets to fulfil. At one level, women wanted to limit their family size, but they did not like the coercive atmosphere. They needed to negotiate from a position of strength and this strength they derived when networking with other women’s groups and institutions.

Mr Nanda, who worked on the National Population Policy (NPP) of 2000, said it was difficult to convince leaders that the population policy had to be a development policy. They did not want any reference to sex or reproductive rights. With the traditional mindset that a large population is a liability, they wanted the NPP to be peppered with family planning terminology. It was only because HIV and AIDS became a major health issue that the use of the phrase “reproductive choice” was incorporated.

So recognising sexual reproductive and health rights is part of the unfinished agenda that needs to be centre-staged at Nairobi. The rights of transgenders and others have to find space in the new thrust. Also crying for attention was the linkage between population and sustainable development. There has to be community level planning and monitoring of these rights, Mr Nanda pointed out.

On the post-Cairo gains, Vimla, who works closely with adolescent girls and boys, said early child marriage before 14 years has stopped. Between the ages of 15 and 18, child marriages still happen but there is greater awareness today that no girl should have children till her body is ready for childbearing. In the area of education, girls are completing their elementary education and 51 per cent of girls are in secondary schools. The gender gap in schooling is closing. In fact, while more girls are accessing secondary education, boys are dropping out.

Though in the name of life skills, there is increased knowledge on sexuality, not enough attention is being paid to training of adolescents and preparing them for a working life. In fact, there is a negligence of the needs of adolescent boys and many of them are pointing to the preferences given to girls whether in terms of nutrition or educational support. In some states like Rajasthan and Gujarat, girl’s secondary schools do not have maths, biology and science — limiting their work choices. Fearing sexual harassment, these girls are afraid to go to co-ed schools.

On what was expected from the UN agencies, Gita Sen said 25 years after Cairo, the fragmentation between population and health issues continues. The huge populations of migrants, living on city fringes, need special attention. The gains of ICPD should be extended to them. Referring to the spike in violence, she said in addition to the traditional beating up of women and young girls, a more insidious form of sexual harassment and violence is gaining ground through the Internet and smartphones. Violence and safety issues have to find place at the Nairobi discussions.

She also highlighted the need to turn into law the amended Medical Termination of Pregnancy (MTP) Act and support women’s access to abortion facilities. In many parts of the country it’s just not possible to get an abortion. Of course, with new medicines, women are resorting to medical abortions which being unregulated could be dangerous.

The UN system should also address the huge decline in women’s participation in the workforce, she pointed out. Both male and female workforce participation has declined and even the data is suppressed. What jobs can girls passing out of secondary education access? Ensuring jobs is not just an economic issue, it is a population, development and human rights issue, Dr Sen pointed out.