Of smartphones, financial literacy and opportunity in Haryana’s khap lands

In just five months, women who had inhibitions about using smartphones are using WhatsApp, Google and making video calls confidently. 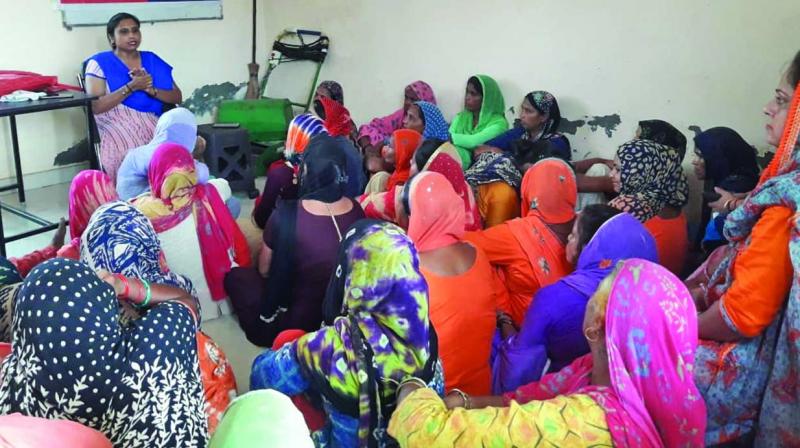 The CFL has given women a platform to interact with 60 women from different villages and discuss their lives and aspirations.

A new cadre of financially literate women, most of them just 10th or 12th pass, but armed with smartphones and a desire to tap not just into the many government social security schemes, but also mutual funds and other investments, are being groomed as Gram Shaktis across 10 blocks of Haryana by Crisil Foundation, the CSR (corporate social responsibility) wing of the credit rating company.

It was in September last year that Poonam Sharma, from Panipat, 39, MA, B.Ed with a diploma in computer applications, was brought on board by the Foundation as a field coordinator. Her first task was to identify 50 women who could take leadership roles by becoming Gram Shaktis and reaching out for financial literacy in 30 villages of Indri block of Karnal district. Poonam reached out to women of the SHGs (self-help groups) who had some knowledge of savings and getting credit from banks. She found not 50 but 60 women eager to get financially empowered for themselves, their families and their villages. Some were village facilitators for the Haryana Rural livelihood Mission.

They had to come to the Money-Wise Centre for Financial Literacy (CFL) with smartphones and were introduced to a mobile learning module for Gram Shaktis. The app has 10 to 25 slides for each lesson and the women had to master them over five/six months of training. “They could work from their homes on the module at any time of the day or night, even at 3 am,” says Poonam. The operation is controlled by the head office of the foundation in Mumbai and once a month the women would meet at the CFL for four to five hours to clarify doubts, upgrade their knowledge and get practical tips. There are 10 CFLs in Haryana, financially supported by NABARD, Punjab National Bank and Syndicate Bank and mandated by the Reserve Bank of India for inclusive financial development. It’s been an amazing journey, says Poonam. When the orientation started, the women came with their husbands on bikes. Slowly, the number of bikes at the CFL increased from two to 30. Now the women come and go on their own. They don’t need escorts. Initially the husbands came not just to drop their wives but also out of curiosity — baffled with the “smartphone-based” training programme. One actually exclaimed, “Training matlab dus se paanch baje, kit, pen aur notebook, lunch aur TA/DA. Yeh kaisa training hai jo ghar pe bhaitey apne samay anusar smartphone ke saath chalaya ja raha hai?” Now many of the men are in awe of their wives and are seeking their guidance for insurance, loans and investments!

In just five months, women who had inhibitions about using smartphones are using WhatsApp, Google and making video calls confidently. Some sit up late into the night putting up screenshots of completed module exercises and raising queries at the Gram Shakti helpdesk. At a special convocation in September, the first batch of about 60 women will get their Gram Shakti certificates, opening up more avenues for them as finance managers in rural India. The Gram Shaktis will add to the grassroots services provided by the Anganwadi worker and ASHA.

It has not been an easy ride, however, for Poonam. Seeing the growing interest in the Gram Shakti programme, with women travelling 15 to 20 km to reach Indri, she identified first two, then four Gram Shakti supervisors to help her as well as handhold the women for building team management and soft skills.

Neelam Panchal and Renu Bala, Gram Shakti supervisors, were members of the SHG in their villages Kamalpur Roran and Islampur, Indri block. Both had demonstrated their ability to build the capacities of the women they were working with and were among the first to join for the Gram Shakti programme. They quickly began using the financial literacy concepts in the SHG meetings and demonstrated “people management and leadership skills”. Both were appointed supervisors with each responsible for supporting 20 to 25 Gram Shakti aspirants. In fact, seeing Neelam’s speedy development, she was taken on board the Crisil Foundation staff team at Indri.

Gram Shakti Reshma of Khanpur village confesses she is self-driven, whether it is for her household chores or as a member of the SHG, but her knowledge of banking services was limited. She also lacked the confidence to walk into a bank and demand a service. After enrolling for the Gram Shakti certification, she says she learnt about banking, insurance, pension and other financial concepts. It was the practical lessons at the end of each module that ensured she understood the product or service. Now confident and assured, she is reaching out to other women to get them financially empowered.

Gram Shakti Poonam Amit Kumar of Sirsi village, Nissing block, Karnal district says financial literacy has enabled her to understand the difference between “savings” and “investment”. Now she is keen to understand mutual funds as an investment option. The girl, who had to drop out of formal education after class eight, now wants to become a graduate through IGNOU. She says with pride, “My husband seeks my help for updating his passbook as well as discussing whether he should opt for the Atal Pension Yojana. With her eyes set on the stars, she says “Kuch paane keliye ziddi hona bahut zaroori hai. Aur haarne keliye daar hi kaafi hai.” (To be an achiever you have to be stubborn and persistent. To fail, all you need is fear.)

Manjit, a Gram Shakti, was able to get Rs 2 lakhs under the PMSBY for the family of a casual labourer who died when he was just 35 years old. “I met the family, got the insurance papers and went with them to the bank and claimed the money. It gave me a sense of achievement as well as earned me the blessings of the family,” she says with pride. “So far, 15 people have received the Rs 2 lakh compensation for injuries and death,” says Poonam Sharma.

Most of the Gram Shaktis who have young children have registered them for the Sukanya Samriddhi Yojana and ensured a better future for them. Manju, who has registered her two daughters for the same scheme, is happy as well as busy roping in people to share the benefits of the government schemes. She is so highly motivated that she went back and gave her English paper in which she had flunked in the 12th board exam.

The CFL has given women a platform to interact with 60 women from different villages and discuss their lives and aspirations. A member of the foundation says, “Haryana has been a journey filled with surprises and revelations. One had never imagined that the rural villages with their age-old traditions, ‘khap’ panchayats and patriarchal outlook could open up to something as vibrant as Gram Shakti. It has opened up a plethora of opportunities — which can be ‘banked’ upon.”