Vipin Kumar (22) was allegedly beaten up brutally by four activists of the Vahini in Kalanpur village in Muzaffarnagar on Monday. 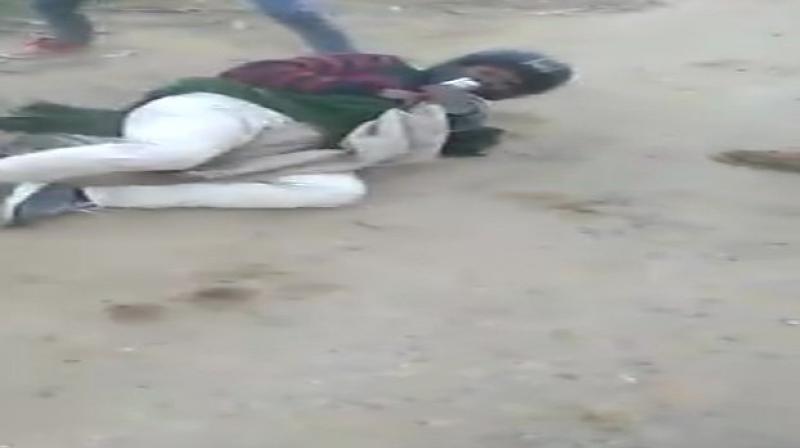 Vipin was assaulted for allegedly leading a Dalit group planning to convert to Buddhism and removing portraits of Hindu deities from their homes. (Photo: ANI/Twitter)

Muzaffarnagar: A day after a Dalit youth was allegedly beaten up and forced to chant ‘Jai Shri Ram’by four Hindu Vahini activists, the Shahid Udham Singh Sena on Tuesday threatened to launch an agitation in Muzaffarnagar if the police failed to arrest the accused by January 17.

Vipin Kumar (22) was allegedly beaten up brutally by four activists of the Vahini in Kalanpur village in Muzaffarnagar on Monday, Circle Officer Yogender Singh said, citing a complaint lodged by the victim, under sections 307 of IPC and the Scheduled
Caste and Scheduled Tribe (Prevention of Atrocities) Act.

A case was registered against accused Rahul, Dhiraj, Jodha and Kaku, who were absconding, Singh said.

Meanwhile, Dalits, led by Shahid Udham Singh Sena president Vikas, have threatened to launch an agitation if their demands were not met.

Vipin was assaulted for allegedly leading a Dalit group planning to convert to Buddhism and removing portraits of Hindu deities from their homes, according to a report in Hindustan Times.

The attackers in a viral video said that they did not have any objection with the Dalits keeping photos of Dr BR Ambedkar and worshiping him but that they could not remove portraits of Hindu gods and goddesses, HT reported.