Veer Savarkar is revered as Hindutva icon for BJP but is accused by its rivals of tendering apologies to British government. 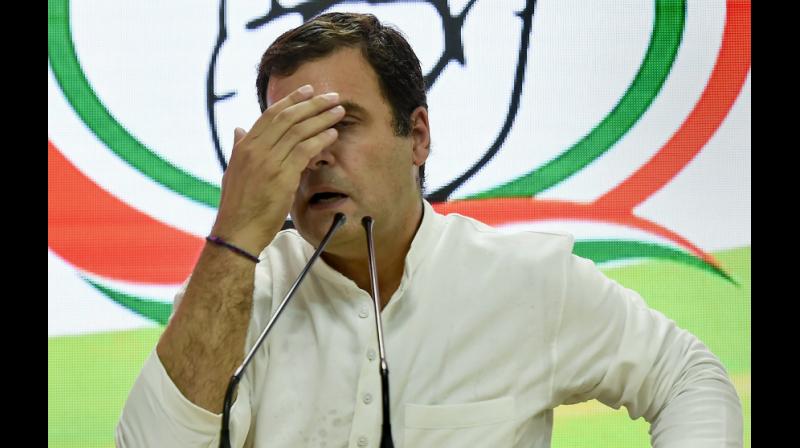 New Delhi: Hitting back at Rahul Gandhi for his Savarkar jibe at the BJP, the ruling party on Saturday said a 'more appropriate' name for the Congress leader is 'Rahul Jinnah' as his 'Muslim appeasement' politics makes him a worthy legatee of Pakistan's founder.

Addressing the Congress' mega 'Bharat Bachao Rally' at Ramlila grounds here, Gandhi had rejected the BJP's demand for an apology for his 'rape in India' barb at the Modi government, saying his name was Rahul Gandhi not Rahul Savarkar, and that he will never apologise for speaking the truth.

Veer Savarkar is revered as Hindutva icon for the BJP but is accused by its rivals of tendering apologies to the British government to secure released from jail when India was under the colonial rule.

Another party spokesperson Sambit Patra said Rahul Gandhi can never be 'Rahul Savarkar' as Savarkar stood for "patriotism, bravery and sacrifice" while the Congress leader is somebody who spoke what Pakistan said on issues like the citizenship bill, Article 370 and surgical strikes among others.

Amit Malviya, the BJP IT cell head, tweeted sarcastically that the former Congress president was right that he can never be Rahul Savarkar.

"For once Rahul Gandhi is right. He can never be 'Rahul Savarkar'. Veer Savarkar is a national icon, who has had a civilisational impact on India's polity and will continue to be revered for generations to come.  5 generation of Nehru-Gandhi family can't measure up to his legacy," he said.

The Shiv Sena also reacted sharply to Rahul Gandhi's jibe `My name is not Rahul Savarkar', saying that there could not be any 'compromise' about reverence for the Hindutva ideologue.

"Veer Savarkar is an idol of whole country and not just Maharashtra. The name Savarkar denotes pride about nation and self. Like Nehru and Gandhi, Savarkar too sacrificed his life for the country. Every such idol must be revered. There is no compromise on this," Sena leader Sanjay Raut tweeted.

Read | 'My name is not Rahul Savarkar, will never apologise,' says Rahul Gandhi

Addressing the Congress' mega "Bharat Bachao Rally" in Delhi earlier in the day, Rahul Gandhi rejected the BJP's demand for apology for his "rape in India" barb, and added that his name was Rahul Gandhi, not "Rahul Savarkar" and he will never apologise for speaking the truth. The Congress is part of the Shiv Sena-led government in Maharashtra.